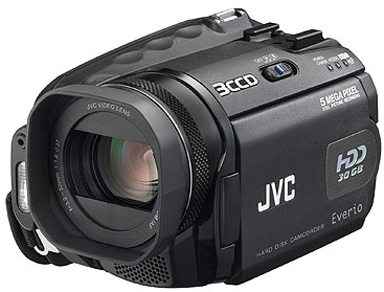 The JVC Everio range set the world on fire when first launched. The idea of a hard disk in a consumer camcorder was radical at the time. Frank McLeod has had a look at the new 3CCD version and liked what he found.

Manufacturers are claiming that more and more entrants into video are now buying from a selection of camcorders using recording media other than the previously almost universal tape. Thus, it should not be surprising that the storage capacity of those cameras using hard disk drives (HDD) for recording is increasing, along with the popularity of the format.

Enter the JVC Everio GZ-MG505AA (505), a snappy little number that is likely to make waves in that pool of consumers looking for one of the new ‘simple’ video-to-DVD units.

The 505 is a 450 gm small, brick-shape of a camera, featuring three reasonable-size 1/4.5 inch CCDs and a 30GB hard disk drive which, according to JVC, provides a shade over seven hours of video shot in the Ultrafine mode. Each CCD is capable of 1,230,000 effective pixels when using in the default 4:3 setting, but surprisingly, this drops by some 40 percent to 774,1880 when used in 16:9 widescreen. Even with that reduction, there is still 2.3 megapixels available in total for video imaging. JVC’s Megabrid Engine is used to process images on the 505, with a new algorithm that is said to improve colour, especially for more natural-looking greens and flesh tones.

The HDD is protected against damage both by a design that sees it ‘floating’ on polymer shock absorbers, as well as a Gravity Sensor System. The latter automatically senses sudden acceleration (as when dropped), and turns off the power to the camera reducing the chance of a head crash. Sadly, the editor would not permit me to test the efficacy of these systems, so we must take JVC at its word. Sensibly, even JVC does not guarantee the effectiveness of these precautions in all circumstances.

Video is recorded at MPEG2 DVD quality, with a variable bit rate in the Ultra mode of 8.5Mbps. Frame rate (50 interlaced, which is another way of describing the normal PAL 25fps) and size (720 x 576 pixels) is maintained until the recording resolution drops to the lowest, or Eco level. This is really for Internet use, with a frame size of 352 x 288 and 25 frames ‘p’ (or progressively scanned) per second.

A novel ‘feature’ of this camera is that there is no electronic viewfinder. However, standing outside with my back to the sun on a clear spring day, I had no problems seeing the images on the 2.7 inch LCD monitor clearly. The usual complaint about LCDs being scarcely usable in bright sunshine is not applicable here.

The JVC lens is rated at f1.8-2.4 for the range of its focal length from 3.2-32mm, which is 10x optical zoom. Surprisingly for a three-chip camera, the image stabilisation system is digital and not optical.

A cold shoe and a mini-jack input allow the use of an aftermarket microphone, but there is no headphone socket. A small joystick located on the outer edge of the LCD controls the secondary functions, including menu selection and manual camera settings, in particular, manual focus and playback.

Although not usually mentioned in detail in our videocamera reviews, the still camera talents of the 505AA do require comment. The camcorder in still mode takes 5 megapixel images and has some rather sophisticated functions such as image bracketing (where three images are taken with differing exposures; one of either side of the exposure of the middle image). While you can save still shots onto an SD card, I wonder why you would bother, with 30GB of hard drive available.

The slide power on/record/playback switch, on the top left-hand side of the camera body, is protected by a small safety button in its middle that has to be depressed to activate the switch. This prevents accidental turn-on and would normally be used by the left hand. Behind the switch, the power/charge, disk access and automatic mode indicator LEDs are in a line, just above the LCD monitor recess. Covered by the closed LCD are the still/video function slide, and four buttons – flash on/off and battery information, auto/manual options, trash/delete and menu buttons. The S-Video plug and the on-camera speaker are in front of these near the lower edge of the camera body.

Most of the secondary controls are exposed when the LCD is opened. At the back of the camera, the battery takes up most of the real estate just under the AV and USB ports hiding behind their plastic hatch cover. These are immediately to the left of the top of the record/pause button, which sits just beneath the covered DC power-in socket.

The lens sports a short rounded-off square hood, in front of a misleading knurled section of the body which serves no function other than to remind the owner that there is no focus ring on this camera. The SD card is inserted and the battery removed from the underside of the camera where also the standard quarter inch tripod mounting holes are found.

The 505 feels nice in the hand, although some may find the small size makes it more difficult to hold steady. The middle, ring and little fingers fit nicely into notches on the top surface of the camera and the primary controls felt comfortable and would suit a range of hand sizes. I did not miss the EVF as I personally rely more on the LCD monitor when shooting.

The zoom has a nice action, but loss of focus is obvious in use until the camera ‘finds’ itself again. There is a little more delay than usual when pressing the record/pause button while the disk is accessed.

The joystick in detail – easy to use and convenient in location. The joystick does little in the auto mode other than switch between 16:9 and 4:3 aspect ratios. In manual mode, and using the points of the compass for reference, access to the backlight (north) is easy and quick; night mode is west (and as useless for moving subjects as we have come to expect), as is manual focus, which is selected by pushing the joystick as a button. This leaves the aspect ratio selection (east) and, to the south, adjustment possibilities for AE (auto exposure).

Under this heading are more image control presets and manual adjustments, including control for overall brightness of the image, white balance settings, aperture and shutter priorities respectively, preset auto exposures for a range of lighting conditions and some video effects, such as strobe and sepia which can be applied to the image being recorded.

An early accessory purchase would be spare batteries, as the supplied 700mAh battery, which can only be charged on the camera, would not go far while travelling.

The 505 comes with a light edition of Cyberlink Power Director and Power Producer, the first being the editing program and the second, the output producer. For an entry-level setup, this is one of the easiest I have ever used. It really is ‘monkey see, monkey do’ simple, and the two components seamlessly flow together. Just taking the defaults and using the Smart Video Rendering Technology, it was quick and painless to produce a DVD with a motion menu.

While some may recall how some of us here have generally decried MPEG editors, Power Director does a pretty good job. It is not a fully featured editor, but certainly this edition certainly does nice cuts, cross fades and has a particularly nice colour corrector filter that is both easy to use and effective. In fact, for someone like me who are verging on the colour-incapable, if I bought this camera, I would be checking out the full version of the Cyberlink suite.

This is a change from my earlier position, which would have been to trash all the accompanying software and simply buy Womble MPEG Wizard DVD.Ã‚Â  While Womble is streets ahead of the included software, for someone entering the world of video, I see no reason to rush out and spend more money on additional software. Down the track a bit, maybe, but not straight off the bat.

I found the pictures to be clear and sharp, with good colour that was true to life. There were perhaps a little more jaggies with movement, and maybe also when looking at lines just off the horizontal (eg. power lines), but if that really was an issue, it could be sorted out by altering the shutter speed. The on-camera sound was in stereo and clear, and I found it very difficult to discern motor noise. Strangely, noise recorded from operating the camera was almost unnoticeable and it went through a number of hands during this assessment.

I didn’t think it would happen (myself not being a great fan of MPEG video cameras), but if someone was entering video – especially if they were intending to travel and wanted a convenient, simple camera with a lot of storage for under $2,000 – then I would have to put the JVC Everio GZ-M505AA on the shortlist. Like all things video, it has its shortcomings and compromises, but when compared to some others in this genre, it certainly is up there with the frontrunners.