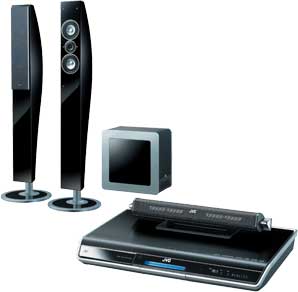 The JVC Sophisti DD-8 system is more than just a surround speaker system, since it also provides you a source for your sound, as well as your video.

In fact, it is a very capable system, with a decent quality DVD player and the ability to connect to a computer network so you can access media (video, music and photos) beyond the confines of the unit itself. This requires the installation of JVC’s own proprietary software on the computer that will be providing the photos, music and video.

There is also a USB socket on the front, so you can use a flash USB card for ad hoc music playback, and photo and video display.

The unit is a five-box system, with two floorstanding main speakers, a subwoofer, a control unit (with the DVD player and an unusual slim centre speaker that also provides, with the main speakers, the surround effect.

Setting up is straightforward, although a bit harder than the others here because of all the wiring that is required. The control unit connects to the subwoofer. This in turn contains the amplifiers for all the other channels.

All the speakers provided with the system were rather inefficient, and with the power output limited to 25 watts for each channel, the system as a whole didn’t go very loud without sounding quite stressed. But at reasonable playback levels it delivered very nice and well-balanced music in stereo mode, and coherent clean sound from movies.

Using a walk-around-the-room-while-talking test DVD, the effect was disconcerting, with odd changes in tonal balance as the speaker went down the sides of the room and a brief collapse of the sound image to the front as the centre rear position was reached.

But with real movies none of this was evident. The voice speaking to Bruce Willis after his return from 1990 in Twelve Monkeys magically appeared behind me, high and to the right just as it does with 5.1 speakers.