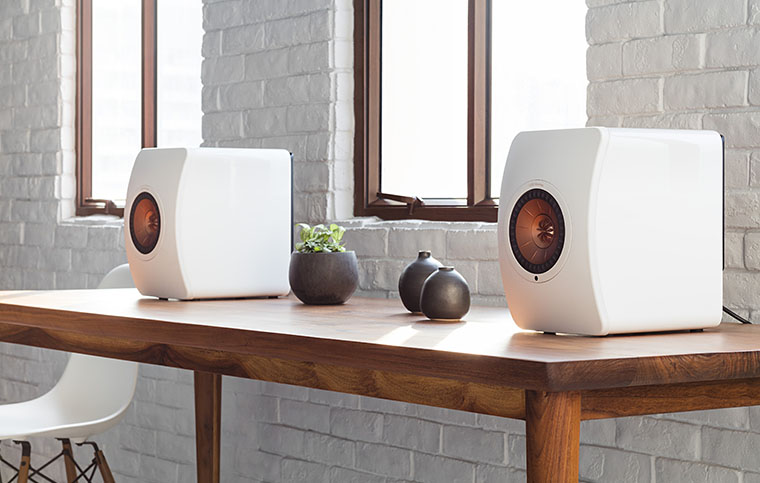 Lots of speaker makers have taken to developing good quality wireless speakers, with interesting designs, decent sound and the consumer confidence engendered by imprimatur of a famous brand. But one famous brand – KEF – has gone a different way. For its wireless system it has taken its highest quality compact stereo speakers – the KEF LS50 stereo speakers – and retrofitted wireless functionality to create the KEF LS50 Wireless speakers.

A confession first: I use a pair of (non-wireless) KEF LS50 speakers myself as near field monitors, supported by a nice little Krix Seismix 1 subwoofer to fill in the deep bass. The results are simply glorious. The LS50 speakers essentially consist of the upper bass and midrange speaker modules from some of KEF’s very highest level loudspeakers – some costing tens of thousands of dollars – placed into extremely strong and rather heavy compact enclosures, carefully designed to optimise sound.

As with the KEF LS50 speakers, the KEF LS50 Wireless speakers use the KEF Uni-Q “driver array” – a high end version of it – which has a 130mm aluminium bass/midrange driver with a hole in the centre, in which is placed a 25mm vented aluminium dome tweeter. This design allows the creation of a true “point” of sound, since the treble and midrange are all coming from exactly the same place.

The sturdy enclosures into which these are placed feature curved faces to reducing diffraction and colouration of the sound, while the sides are finished in high gloss. The drivers are exposed – no cloth grilles – and available (like the enclosure) in a range of colours. The “Titanium Grey” model comes with the speaker cones finished in red; high gloss white uses a copper finish to the cones, while high gloss black has the Uni-Q drivers finished in blue. They weigh around 10 kilograms each, despite measuring just 300mm tall, 200mm wide and 308mm deep.

Each speaker packs two amplifiers: 200 watts for the larger driver and 30 watts for the tweeter, which means that they use an “active” crossover (ie. the sound is divided between bass and treble before it gets amplified rather than afterwards, allowing for greater precision). KEF has been able to provide deeper bass compared to the standard LS50 speakers, thanks to better control by the amplifier. Instead of 79 to 28,000 hertz, the frequency response is 45, 50 or 61 to 28,000 hertz, depending on the EQ settings.

But just in case, there’s a line level subwoofer output.

What does that 230 watts get you? Up to 106 decibels of sound pressure level, says KEF.

The speakers support both Ethernet and WiFi (dual band), Bluetooth (with the aptX codec for high quality from some Android devices), optical digital audio, stereo analogue audio and can act as high resolution USB audio devices for Windows and Mac computers.

Up to a dozen can be connected and, of course, everything is managed using an iOS or Android app.