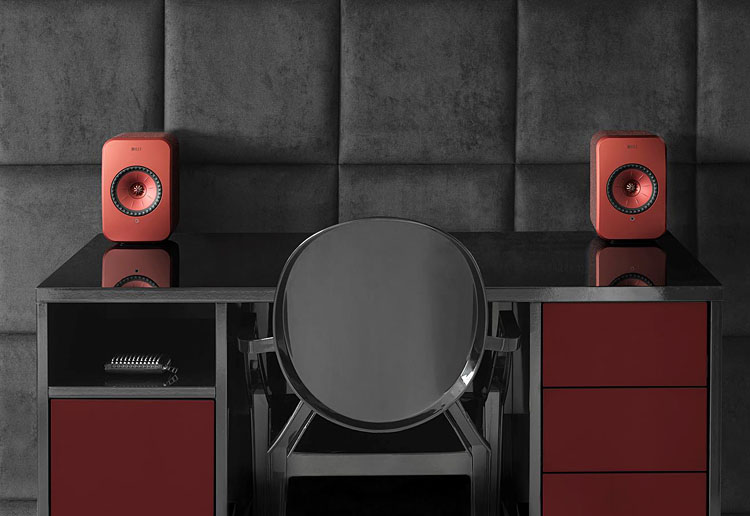 There was a certain point in the 1980s when English loudspeaker makers introduced a new category: small, but extremely high-quality models. You can draw a line directly from there to the KEF LSX powered speakers.

Those were speakers like the original Wharfedale Diamond. They were like super high-end speakers without their woofers. But they were designed so that the bass they produced was tight and controlled, while the rest of the sound would satisfy any audiophile.

A more recent manifestation of this is the LS50 speakers, introduced in recent years by British firm KEF loudspeakers. These are glorious little speakers, featuring KEF’s Uni-Q driver arrangement. That has a 25mm tweeter located right at the centre of a 130mm bass/midrange unit. Fine materials and careful design help contribute to their near $2,000 price, and to their exceptional sound.

I know, because I use a pair of LS50 speakers myself on my desk for all manner of critical listening.

Since then KEF introduced the LS50 Wireless, which added an amplifier, Wi-Fi and Bluetooth, as well as some impressive tuning which enhanced the bass performance. We talk about those ones here.

Most recently it has launched the KEF LSX speakers, which are essentially a smaller version of the LS50 Wireless.

These still use the Uni-Q speaker arrangement, but the larger driver is now 115mm. The speakers only measure 250mm tall (by 155mm wide and 180mm deep). Despite the size, they are heavy at around 3.5 kilograms each. As with the LS50 and LS50 Wireless, the KEF LSX speakers don’t have a grille over the front. That makes the metallic look drivers part of the aesthetic. They are available in five colours: white, red, green, blue and black, with a metallic look at the front on each. Three models have the drivers finished in contrasting colours. All feature a tweedy cloth wrap around their bodies.

Each packs two amplifiers. A 70-watt amp runs the bigger driver, and a 30-watt amplifier drives the tweeter. They connect with each other wirelessly, but you can use a standard Ethernet cable to connect “Master” and “Slave” if you prefer. They can be configured either way around for Left/Right purposes.

The Wi-Fi is dual band 802.11a/b/g/n. The Bluetooth supports the aptX codec for higher quality. There’s also an optical input and an analogue one. I used a couple of different source devices, including a turntable, plus Bluetooth and network audio. The latter included streaming stuff using DLNA software, and also Spotify music. I don’t have a subscription, but the KEF says that the speakers work with TIDAL as well.

Setting up the KEF LSX speakers

Aggghhh! I hate insistent redirections. I had a problem. I was after more information. These speakers weren’t yet listed on KEF Australia website (au.kef.com). So, I tried the US website (us.kef.com). But it redirected automatically to the Australian website. Fair enough. Lots of people type things like kef.com and would rather come to their local site. So, I explicitly typed in the UK site: www.kef.co.uk. And it redirected to the Australian site.

I had to fire up my VPN and pretend I was in the UK to get there.

Anyway, there were a couple of setup wobbles. You install the “KEF Control” app on a phone or tablet (Android or iOS is fine) to set up and control the KEF LSX speakers. Then using it or using your device’s Wi-Fi settings you look for the speaker and connect to it. It seemed very slow to appear. Perhaps I was just impatient. It was this that sent me looking for a full manual on the KEF websites. It seems that there isn’t one.

Anyway, with a bit of persistence and after a couple of repeated goes, including pressing the indented “reset” button on the speakers, they finally appeared in the Wi-Fi listing. After that things went smoothly. You select them as your Wi-Fi access point on your phone, enter the necessary Wi-Fi connection information for your home and the speakers connect.

The KEF Control app lets you select inputs, adjust the volume level, and change some deeper settings. I’ll be talking about subwoofer settings later. The main things you’ll choose is whether you have the KEF LSX speaker on stands or a desk, the size of your room and how “bright” your room is. All those things are factored into the sound profile so that the speakers produce sound well fitted for their environment. For example, if the room is “bright” – it has lots of sound reflective surfaces – then the speaker pulls back the treble a little to keep a good tonal balance.

First, a summary of what you’ll experience with the KEF LSX speakers: you’ll hear what audiophiles are after in their loudspeakers. Not all of it, but a huge chunk of it. What you get is a look into your music as it is recorded; as it is supposed to be heard. It’s hard to describe, but there’s a difference between a steak-and-veggies presentation of your music, and what these do. There’s nothing wrong with steak-and-veggies. It’s nutritious and satisfying. But it’s not all that there is.

With one clear deficiency, the KEF LSX speakers deliver all that there is. That deficiency is deep and extended bass. I’ll return to that shortly. Apart from that deep bass, these speakers deliver an immaculate tonal balance. Mid and upper bass and the midrange and the treble are all there, and all where they ought to be. There was unimpeachable detail. If you’re used to listening closely to music through regular speakers, you’ll find that listening through these lifts an obscuring veil. You’ll hear stuff that you’ve likely never heard before.

And you’ll discover a new sense of what stereo has to offer. These speakers deliver not just left/right separation, but a sense of a presence of instruments and voices located in a space beyond the speakers. This is high order stereo performance.

I happened to be testing out a rather expensive universal disc player while I had these speakers for review, so I plugged the player’s stereo analogue outputs into these speakers and had a listen to my old DVD Audio disc version of Alice Cooper’s Welcome to My Nightmare. DVD Audio, in case you’ve forgotten, was one of the competing high-resolution audio standards from a decade or more ago (the other was SACD). Neither really took off. But it provided high resolution audio, losslessly compressed in a standard (then called MLP, or Meridian Lossless Packing) which eventually transformed into Dolby TrueHD.

And it sounded glorious. Despite my cautions earlier about bass, even that seemed full, if not entirely complete. Again, there was that magical roundedness in the sound, with each instrument (counting the vocalist, Vince Furnier himself, as an instrument).

Then I went over to vinyl, trying out a few of my ancient LPs. The Sherbert album Photoplay was impressive, except that it seemed a little light on with the bass.

Well, KEF provided the facility, so why not use it? That facility is the subwoofer output. This is just a straightforward RCA socket. But it’s more than that, thanks to the processing built into the speakers.

There are lots of compact powered speakers, and indeed stereo amplifiers, with subwoofer outputs. But what these almost always do is just provide a mix-down of the left and right channels. The subwoofer gets the whole bandwidth of sound, and it’s up to the subwoofer to do what it will with it. Meanwhile, the main speakers are still getting the bass as well.

That second thing is almost never down (outside of home theatre receivers, which definitely do do that). But it’s very important, because it relieves the speakers from the responsibility for delivering bass, so they have more capacity for doing the stuff they do best, the midrange and treble.

I set both to 80 hertz, so the LSX speakers were still doing the upper bass and a bit of the mid bass. That increased the capacity of the speakers quite significantly. I found that I could push higher volume levels out of them without stress. By higher volume levels, I mean I had the speakers (and sub) peaking at over 100 decibels, measured at 2.5 metres, and the music was clean, clear and undistorted.

The subwoofer I was using was a fairly old 400-watt, 15-inch model, so it was able to handle the deep stuff well.

If you have a lot of high-resolution music, I’d strongly recommend using an Ethernet connection – that is, a network cable – rather than relying on Wi-Fi. In my office, using Wi-Fi, things were a little stuttery with standard Direct Stream Digital music streaming to the speakers. And with 24 bit, 192kHz FLAC files, there were only short bursts of music, punctuated by long waits as the buffer accumulated more data for another burst. Plugging in a cable sorted that (although it was necessary to force the app closed, and then restart it to make it work properly). Indeed, the speakers then supported the rather rarer DSD128 (double speed Direct Stream Digital) format. Indeed, as I write these words an audiophile jazz recording in this format is playing through these speakers.

As with vinyl and DVD Audio, the sound quality was glorious. Without the subwoofer it was able to fill a room with fine sound. With a subwoofer, the KEF LSX speakers engulfed the room with glorious sound, relishing it seems the task.

I guess $1,895 sounds like a lot of money for a pair of small stereo speakers, even powered ones. But what you’re getting is the mid and high section of a true audiophile pair of speakers, ones that you’d expect to pay many, many thousands of dollars for. You just don’t get much of the bass section.

But you can add that with a reasonably priced active subwoofer. So do yourself a favour and go and have a listen to these little beauties.