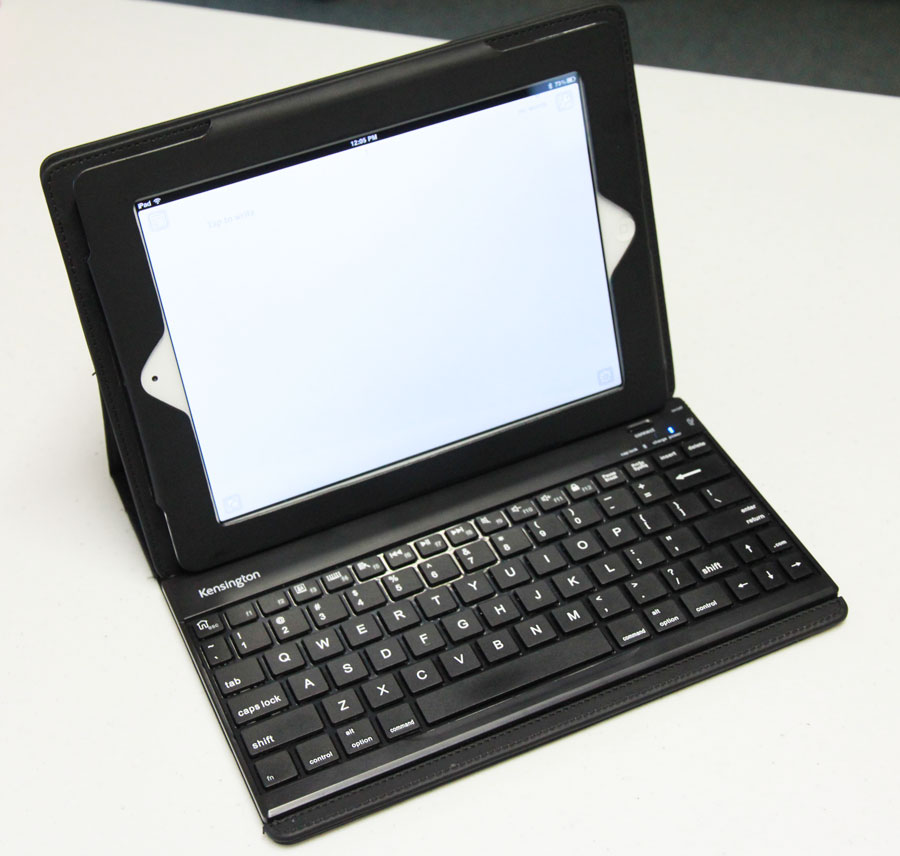 One of the best selling accessories for the iPad has been Apple’s Bluetooth keyboard, a peripheral that signals the strong desire among buyers to convert Apple’s versatile tablet into a sometimes-notebook. Kensington presents a more integrated solution with its KeyFolio Pro Performance Keyboard Case, a Bluetooth keyboard that, mated with the iPad 2, adds up to something like a cheat’s MacBook Air.

Designed for the Apple iPad 2, Kensington’s case combines a chiclet style keyboard, like those found on recent-model Apple notebook,s with a sleeve-like section. It is not designed to hold the  original iPad.

The keyboard uses a full QWERTY layout and is built similarly to the Mac wireless keyboard that accompanies the Apple iMac, albeit black instead of Apple’s silver and white. To accommodate the iPad 2, the function keys are set up a little differently: there’s support for displaying the onscreen keyboard, direct search, the iPad picture frame, home screen and volume controls, plus media playback and for locking the device.

The case itself supports the iPad 2 in landscape and portrait orientations, and with a hole cut into the rear of the rubber casing, the rear camera is available in both configurations. The front of the case also has cut-out sections for the front-camera and home button, with space for the docking connector found on the right-most part of the case.

On the side of the keyboard, you’ll find a microUSB connection for charging the keyboard, as well as an on/off switch. A USB to microUSB cable is included for recharging your keyboard over a computer USB port, though you could just as easily use a mobile phone charge pack with a USB port, such as the iPad charging brick.

Most current Bluetooth keyboards for iPad are made of rubber, so the action is a long way from that offered by a conventional computer keyboard. There’s little travel in the physical keys, which means poor feedback and inaccurate text entry.

For just a hair under a hundred of the folding stuff, Kensington’s newest iPad 2 case delivers an authentic keyboard feel, and although the keys are more tightly spaced than those on a notebook keyboard, we experienced no problems using it to make notes on our iPad 2.

And while you can use the screen in landscape mode, swivelling the iPad into portrait seemed to provid a larger, better view of the type area, especially with the combo located on a desktop.

The case does add bulk to the iPad, increasing the tablet’s 2.88mm thickness three-fold to 30mm, and the keyboard’s battery is rated for 100 hours of operation, with 60 days standby time, which is pretty good. We haven’t charged the keyboard since removing it from its packaging three weeks ago and have used it for around two yours each day, so there’s no cause to doubt these figures. every day to write for at least two hours a day in the past week.

The keyboard clicks in all the right places and the iPad 2 responds quickly to even the speediest of keystrokes, something that you can’t get away with on the iPad’s touchscreen. Neglect to use the iPad for more than ten minutes and the keyboard goes to a standby mode, waking up only when the iPad is reactivated. From this point it takes a couple of keystrokes for the iPad and keyboard to re-establish a connection. Until the connection is made, these keystrokes will not register on the iPad.

The only real criticism is that the synthetic leather used in Kensington’s KeyFolio Pro Performance Keyboard Case keyboard case doesn’t really satisfy our idea of “pro”. We would have preferred real leather.

Kensington’s accessory does a good job of protecting the iPad 2 while offering a solid and well-built keyboard that adds a good deal of utility to the tablet. Real leather livery would be great, but it’s absence in no way interferes with the solid experience offered by the KeyFolio Pro.