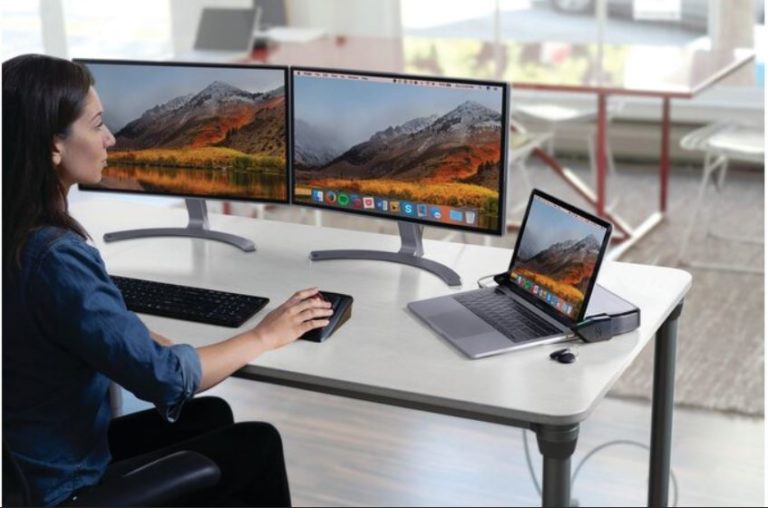 The Kensington LD5400T Thunderbolt 3 Dock with K-Fob smart lock is a slightly different dock. It is made for ultra-books and laptops and incorporates two security features that would be useful for hot desking

Add to that a 170W charger brick (85W power delivery), 5K video support and a range of USB-A ports, and it is a hot desking winner.

More Windows laptops, MacBooks and monitors support Thunderbolt 3 (or USB-C Gen 3.1) for expansion and charging. Intel has given Thunderbolt 3 to the world for free – it is now the communication standard moving forward.

Simply put a single Thunderbolt 3 passive cable (a .5m USB-C to USB-C cable) can transmit data up to 40Gbps (that is 5000MBps). It can also transmit up to 5K DisplayPort over USB-C (or convert to HDMI), upstream (charging the laptop) and downstream (power devices like portable hard disks) via USB-A 3.0 gen 3.1.

This dock is not compatible with standard USB-C docks that support 5Gbps (625MBps).

Kensington’s SD5200DT Thunderbolt 3 dock (review here)  was awarded GadgetGuy’s ‘Best for Windows’. It’s great for Mac too, but the OWC Dock (review here) took that gong due to it having a legacy FireWire 800 port (used for older Macs).

We assume that the Thunderbolt performance of the LD5400T dock is the same as the SD5200T. We could not find any performance differences to that.

The best way to describe it is a typical dock at the back with a front rest for an 11-15-inch notebook and arms either side to secure it. Try as I may these would not open these manually. Ah, perhaps that what the K-Fobs are for. Voila, the arms magically opened.

The idea is that hot deskers can have their own K-Fob to access an empty dock or sysadmins can securely lock the notebooks down. Either way, you register the K-Fob number for free cloud-based key fob management and replacement.

Apart from the Kensington lock cable, you can screw the dock to a desk.

The four rear USB-A 3.0 – ports support 5V/.9A each – not fast charge. Two of these have sleep charging. These are fine for most external backup to flash, SSD or HDD.

You can connect up to five daisy-chained devices to the downstream Thunderbolt 3 (one device to the next).

By chance, I had the one notebook that does not work well with the LD5400T – a Huawei MateBook X Pro with almost no bottom bezel.

You see the security arms partially obscure the bottom taskbar where most laptops have a bezel. It is not a big issue.

The laptops sat nicely with no keyboard platform tilt.

We tested with a range of 32 to 42-inch 4K monitors, and it was perfect firing up the second monitor as soon as the laptop work up – that does not always happen with cheaper docks.

There is also a 3.5mm combo audio and a 1 Gigabit Ethernet port (See DockWorks for added functionality)

Ethernet was rock solid at 1GBps.

Using the Samsung Thunderbolt 3 X5 PCIe NVME SSD 1TB we achieved 2600/1500 MBps sequential read and write – about the same as the SD5200DT dock.

I have tested a lot of Thunderbolt 3 docs. Twelve months ago they were in their infancy, and Kensington is the only one that performed well out of the box.

Since then Intel has rolled-out several Thunderbolt 3 software updates and computers have advanced so that everything just works.

Me – I prefer the SD5002T if only that it has USB-A ports delivering 5V/2.1A charge and two front ports.

But the LD5400T is a desktop unit designed to secure your asset, and on that score it is superior.

Features
Value for money
Performance
Ease of Use
Design
Reader Rating0 Votes
Worked flawlessly with a MacBook 2018 and Windows 10 laptop (many docks do not)
Kensington Lock slot in addition to cable lock
Kensington quality
Can’t close the laptop lid
Don’t lose those K-Fobs
4.4