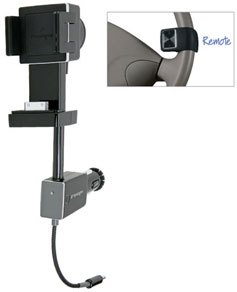 The iPhone is an interesting device because it’s a very high end phone, priced on plans that mean it can be owned by everyone. Back in the day, high-tech “computer” phones like the iPhone were owned by the sorts of people who could justify a $1,500 custom hands-free system for their car.

What the iPhone needs though is a cheap and cheerful car adaptor that allows its owner to still make use of its more advanced features.

Fortunately, Kensington has created one!

The LiquidAUX Deluxe is the flagship of the LiquidAUX family, which also includes a basic charger for the iPhone and a Bluetooth unit that works with all Bluetooth-enabled phones. Naturally, the units that have iPhone adaptors also work with iPods, though not the third generation iPods despite their docking port.

The Deluxe includes a cradle attached to a typical cigarette-lighter power adapter, which has a plastic clamp system for multiple iPod sizes.

The best feature though is the 2.4GHz wireless remote, which clamps onto the steering-wheel and allows for control of start, stop, forward, back and the various shuffle and repeat modes.

The LiquidAUX Bluetooth doesn’t have a cradle, but it does have phone controls on the power adaptor. It also comes with a 2.4GHz wireless remote.

Audio gets into your car stereo via a 3.5″ auxiliary cable: you’ll need to have the corresponding port on the front of the head unit. Don’t fret if you don’t: just grab a 3.5″ to RCA converter and use the RCA ports on the BACK of your head unit.

Strap the remote to your steering-wheel, mount the iPhone and you’re away! The unit will charge the phone and the remote will operate it, but otherwise the dock is transparent to the iPhone so you can access all functions through the touchscreen interface as normal.

The LiquidAUX Bluetooth of course requires pairing with your phone (it supports all phones, not just iPhone), but this is done in the traditional way. Depending on the make of your phone, the remote may not work as expected, though it’s just fine if you’re using the iPhone via Bluetooth.

This is a basic dock so performance is pretty straightforward. One neat touch is the way the cradle can swivel and tilt in almost any direction, allowing your passenger to watch movies on the iPhone as you drive, or allow you to browse music via Cover Flow.

While the Bluetooth version has phone controls on the power adapter and the remote, it’s a little disappointing the LiquidAUX Deluxe doesn’t have similar phone controls. When the iPhone is in the dock, you’ll still need to lean over and tap the answer icon when you get a call. There’s also no microphone on the Deluxe: you’ll have to rely on the iPhone’s speaker phone mode. The Bluetooth unit does include a microphone.

The Bluetooth unit has a microphone embedded, for voice dialling if you phone supports it. There’s also a USB port for charging the phone, though no cable is included since every make of phone has a different kind of cable!

One final irritation: the built-in aux cable is a little too short for cars that have their aux port at the top of the centre console and the cigarette lighter at the bottom. But the four foot extension cable is of course too long! This means you will need to suffer some unsightly cables in your cabin, unfortunately.

The LiquidAUX Deluxe, Bluetooth and others in the family (there’s the straight LiquidAUX for iPhone, $99, which has a dock connector but no cradle – still has a remote though) are simple to use and relatively low in cost. This means you can justify a hands free for your old banger without having to spend thousands upgrading your entire audio system.

Thanks to the aux input, audio quality is good, and with iPods now boasting up to 120GB of storage, you can now have yourself a whole lot of travelling music.