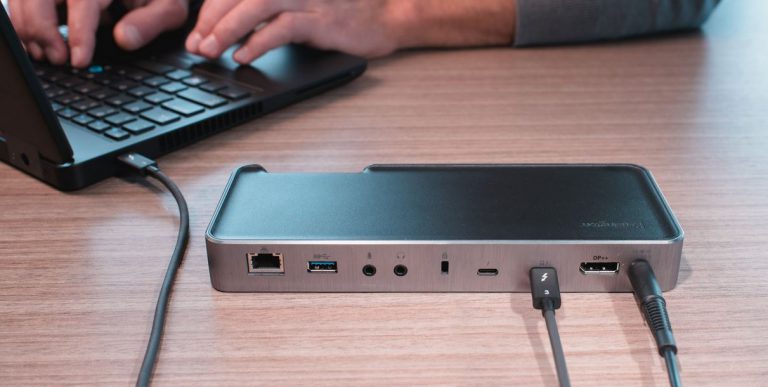 The Kensington Thunderbolt 3 dock (SD5200DT) has proven it is equally at home plugged into a Windows or Mac device.

2018 is the year of Thunderbolt 3. Almost every new model laptop and tablet has adopted the 40Gb/s, USB-C connection for data and power delivery enabling smaller, thinner devices.

The downside is that almost all expandability requires add-on dongles or docks to get additional HDMI, DisplayPort, USB-A, USB-C, Ethernet, and more.

As GadgetGuy found some docks like the OWC are “Best for Mac” and includes a lot of exclusive Apple features like legacy Firewire 800 and S/PDIF ports.

The Kensington Thunderbolt 3 SD5200DT is “Best for Windows”. It also has a Mac-specific version SD5000T (not tested). I can’t see any external difference, but I suspect it uses more Mac compatible circuitry.

What we were most impressed with was that the HP saw the device and loaded all the appropriate drivers without missing a beat.  The Kensington also met the power requirements of the HP which while only 65W would not work with many other brands of docks.

The first impression is that it is solid and well built. While I would have preferred more USB-A ports, the 2.1A port makes up for that as you can safely attach a small passive hub if you need it. Also, many HD and 4K monitors have USB powered ports.

How to connect monitors

USB-C/Thunderbolt 3 standard assumes that all graphics processing is done via the host computer. The limitation on one or two external monitors is determined by the computer’s GPU.

How to connect a single up to 5K monitor

The DisplayPort 1.2 supports sound and video up to 5K over the one cable. You can get DisplayPort to HDMI or VGA/DVI adapters/cables.

The first monitor connects to the DisplayPort. The second uses a USB-C/Thunderbolt cable (note it must be active if you want to run it over .5m) to a Thunderbolt 3 monitor or an adaptor (USB-C to HDMI/VGA/DVI etc.).

Ethernet was a rock solid 1Gb/s.

It was difficult to test the 40Gb/s (5,000 MB/s) Thunderbolt 3 claim. Attaching a Samsung T3 1TB drive gave an amazing and consistent write speed of 400MB/s (the theoretical maximum rate is 450MB/s), so all I can surmise is that the port is very fast.

Interestingly the T3 also achieved that speed on the USB-A port proving its 5GB/s capacity.

I like Kensington Docks – I have tested many over the years, and they all work flawlessly.

I have been testing various docks on both Mac and Windows, and this is the only one so far that we can unreservedly recommend as “Best for Windows”.

Overall
Features
Value for money
Performance
Ease of Use
Design
Reader Rating0 Votes
Best for Windows, great for Mac too
None really
4.7