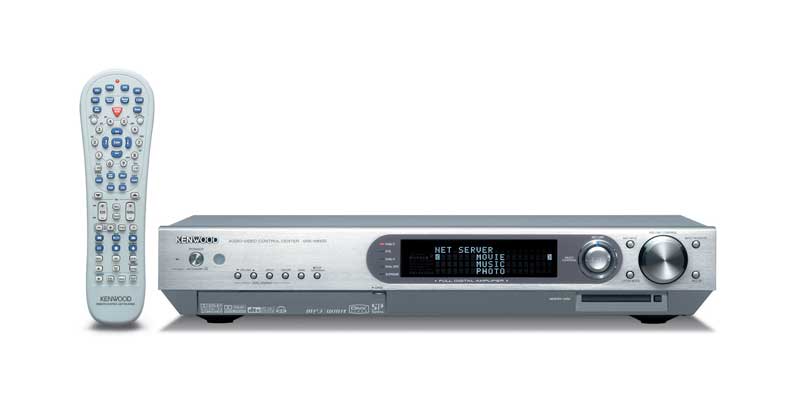 The partner member of the DVF-N7080 in Kenwood’s Network Concept duo is the VRS-N8100 AV receiver. Like the DVF-N7080 DVD player, it also sports a PC Card slot at the front and an Ethernet port at the rear. This allows the receiver to connect over a PC network to the same server software running on a Windows PC as the DVF-N7080. Like the DVF-N7080 though, the VRS-N8100 also suffers from a fairly slow and clunky interface, but you do get access to all your stored digital music, videos and images.

Besides the network functionality, the VRS-N8100 operates like a regular AV receiver – it essentially sits between all your various audio and video sources and your television and speakers. If you have more than one source, such as a DVD player, digital set-top box and VCR, as well as some 5.1 speakers that need feeding from a powerful amplifier, then an AV receiver can make your life a whole lot easier.

On the front and back of the VRS-N8100 you’ll find a wide range of input and output connectors, including multiple optical and coaxial digital audio inputs as well as no less than 6 stereo RCA inputs. Video is also well catered for, with 5 composite, 2 S-Video and 2 component inputs. The outputs include a 5.1 surround speaker output, with gold plated banana plug terminals for the left and right speakers. There is also a pre output if you want to run your audio through a different amplifier.

To control this behemoth is a fairly compact remote, although the trade off is a mass of small buttons with even smaller text on or around them. Many buttons also server multiple functions, so it’ll take some experimentation or trial and error to get the hang of things.