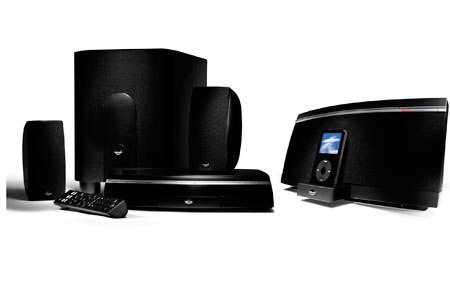 To be honest, some so-called ‘wireless’ AV system are more trouble than they’re worth. There’s plenty of AV gear that calls itself ‘wireless’ and is anything but – especially home theatre systems. Thankfully, this Klipsch CS-700 system and partnering RoomGroove iPod dock (available separately, $449 RRP) are some of the first truly ‘wireless’ audio-visual components I’ve come across since manufacturers supposedly started ditching the cord spaghetti.

The CS-700 is a 2.1-channel AV system providing Dolby Virtual Surround. The active subwoofer is wireless, while two satellite speakers connect to the CD/DVD/tuner component with cables. Along with a couple of power cords, this is the only cabling. The system incorporates KlipschCast wireless technology that uses the 2.4GHz band to transmit and receive (to a certain degree) between other KlipschCast components – namely the company’s RoomGroove iPod dock/speaker system.

The central electronics component incorporates a CD/DVD player plus RDS FM and AM tuner. It outputs up to 1080i resolution via its HDMI or component video outputs and two auxiliary inputs for connecting other AV sources. The satellites are small, feature Klipsch’s customary horn-loaded tweeters and together with the active 200mm (8 inch) 200 watt subwoofer, aim to do the job of a conventional 5.1 speaker system, using Dolby’s Virtual Surround processing.

The RoomGroove sports a retractable iPod cradle (compatible with iPhone too) or you can plug in other MP3 players; is fully remote controllable and will receive audio from the CS-700. You can easily add more RoomGrooves around the house (an unlimited number, according to Klipsch) to create a wireless network transmitting audio from the CS-700’s FM/AM tuner or inbuilt CD/DVD player, or a connected PVR or HD set-top box. The CS-700 is also multi-source, capable of delivering audio from two different sources – say radio and CD – to two rooms simultaneously.

Up and running in no time at all, this is one of easiest home theatre in a box systems to install. What’s more, the wireless functionality came on song without any hassles also. I was expecting trouble, but soon had stereo sound – a CD playing on the CS-700 system – pumping out of the RoomGroove. I also loved the way you could control the CS-700 from the RoomGroove’s remote, changing source, volume and tracks.

Despite its compactness, the RoomGroove pumps out a solid bass, but things start to distort a little if the volume’s cranked too far. It worked great receiving audio from the CS-700 in the same room, so I tried it in another part of the house, only to find that with around 18 metres between the two, the audio began to break up.

Klipsch claims around 30 metres as an average range for the system when used in wood and/or gyprock (rather than metal and concrete) constructions. Our test location is gyprocked/fibro clad, so I would have expected better transmission/reception. Moving the RoomGroove a couple of metres closer to the room with the CS-700 improved things, but the sound was not what you’d call CD quality.

The CS-700 system makes plenty of noise itself and despite reservations, the Dolby Virtual Surround did a convincing job. There was a definite centralisation of dialogue and, at times, even rear effects sounded as if they were coming from the right surround spots. I wouldn’t say it’ll give you the presence and spread from a conventional 5.1 system, but it does the trick nonetheless without the box count and messy wires.

Musically, the Klipsch can hold a tune and as a sub/sat system the trio delivers a nicely balanced performance, with ample dynamics from such compactness.

These Klipsch components take the hassle and expense out of putting together a wireless multi-room audio network. It has limitations, but essentially Klipsch’s efforts with both these components have resulted in a HTIB solution that sounds and looks good, plus it keeps a wonderfully low visual profile around the house.

Overall
Features
Value for money
Performance
Ease of Use
Reader Rating0 Votes
Really does away with wires; Wireless networking a doddle to use; Great sound and picture quality
No wireless audio feed from RoomGroove to CS-700; RoomGroove volume limitations; Wireless distance reception could be an issue
4