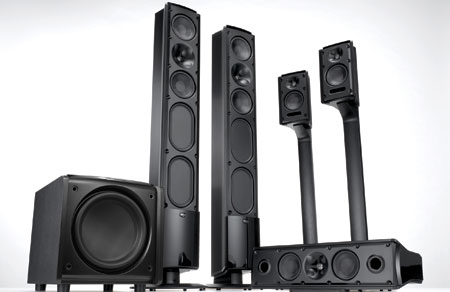 Klipsch is not so much US loudspeaker maker as a high fidelity legend, with its reputation for incredibly high sensitivity loudspeakers beginning well before the Second World War. Although at first glance the Klipsch Icon XF-48 surround loudspeaker package may appear to depart from the horn-loaded boxiness of those Klipsch speakers of yore, look closely and you will find that the horns remain.

In fact, each of the five speakers (not the subwoofer, obviously) feature a 19mm compression driver mounted in a quite obtusely angled horn, rather than the dome tweeter most companies would use in its place. This provides high efficiency, with the centre XL-23 LCR speaker rated at 94dB sensitivity, and even the small XB-10 having a claimed 92dB.

The front speaker sensitivity is not stated because the XF-48 floorstanders are active, with each having a 100 watts of power built in. Connections can be made with either line level signals from a preamplifier, or speaker levels ones.

What first appears to an impressive line up of five drivers on the front of these turns out to be two, with the pair of large oval units actually being passive radiators. So the tweeter and a pair of 133mm bass/midrange units do all the work with that 100 watts. The narrow form of these speakers is stabilised by a 300mm circular floor stand, supplied pre-attached.

A similar stand is supplied for the XL-23 LCR centre channel (this can be fitted to allow either vertical or horizontal placement) and wall mounting hardware is provided for both this and the compact XB-10 speakers.

For really deep bass the XW-500d subwoofer is included. This uses a 254mm driver mounted in a sealed enclosure and supplied with 500 watts of Klipsch’s ‘BASH’ hybrid digital amplification. Klipsch has tossed in some DSP processing and an electronic controller which allows you to save settings. There are three EQ settings to allow greater bass extension or more power in the main LFE range.

During the process of wiring everything up, I was inclined to think that this system seemed a bit contrived to fit in with the home theatre norms of today. But once I got it going, that prejudgement rapidly disappeared, because this is simply a marvellous sounding system.

The first impression was one of total authority. One reason for that was the higher than usual volume levels for any particular notch on the volume control knob. Since it is always difficult to know what an active loudspeaker is getting up to internally, that didn’t mean very much. So I turned the knob clockwise, and the whole system simply got louder and louder, without stress, and only with the tiniest bit of dynamic range compression sneaking in at the extremes.

For stereo sound, the XF-48 speakers produced superb imaging and gave a performance of startlingly good tonal balance and clarity. Adding the other channels into a surround mix gave excellent in-between speaker imaging. The subwoofer truly delivered the claimed 21 hertz, as confirmed by my test tones rattling my room.

The problem with a speaker package like this is finding the obligatory negative point to make. I declare that I have failed in my duty, and have no such thing to say. This is a great system.