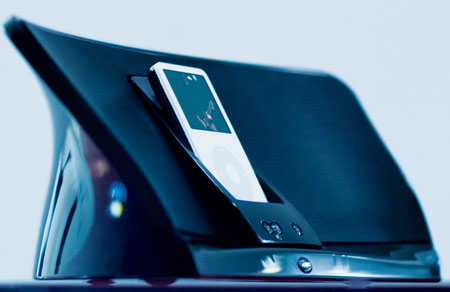 The RoomGroove sports a retractable iPod cradle (compatible with iPhone too) or you can plug in other MP3 players; is fully remote controllable and will receive audio from the Klipsch CS-700. You can easily add more RoomGrooves around the house (an unlimited number, according to Klipsch) to create a wireless network transmitting audio from the CS-700’s FM/AM tuner or inbuilt CD/DVD player, or a connected PVR or HD set-top box. The CS-700 is also multi-source, capable of delivering audio from two different sources – say radio and CD – to two rooms simultaneously.

Despite its compactness, the RoomGroove pumps out a solid bass, but things start to distort a little if the volume’s cranked too far. It worked great receiving audio from the CS-700 in the same room, so I tried it in another part of the house, only to find that with around 18 metres between the two, the audio began to break up.

Reader Rating0 Votes
Retractable iPod cradle, for those who want to plug in other MP3 players
Volume limitations
0