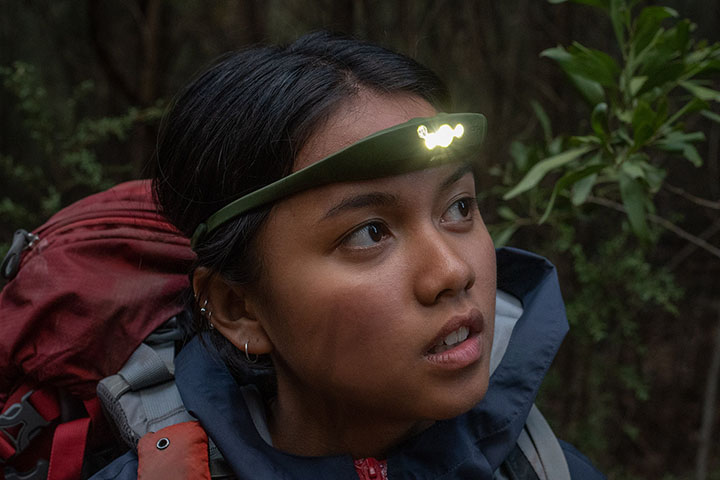 “Designed in Melbourne”. You don’t see too many gadgets bearing that tag, but it applies to the Knog Bandicoot silicone headlamp. And, you know, I kind of think that every travellers backpack, and everyone’s emergency kit, ought to have one of these.

First, what it it? The Knog Bandicoot is an adjustable silicone headband which a rechargeable battery and an array of lights. Slip one of these over your head and you can navigate the bush at night, read in the dark and generally live in the 21st Century under adverse conditions.

And why should everyone have one? Well, the Knog Bandicoot is very light at 58.9 grams – slightly under Knog’s 60 gram specification. It’s super flexible, so it can pack away in all manner of nooks without occupying much space. The Knog Bandicoot is easy to use. It doesn’t even employ a separate charge cable. And it’s cheap.

Well $59.95 isn’t exceptionally cheap, but consider the alternatives. The Knog Bandicoot is less than one quarter of the price. (And less than one third the weight.)

That comes at some cost in performance. Specifically, the Knog Bandicoot tops out at 100 lumens. That more expensive one can, at a pinch, go up to 1,000.

The Knog Bandicoot is mostly a silicone band. That’s available in black, indigo, khaki, orange or red. Respecting our conservative nature, the Knog people sent us the bright orange one.

The band is adjustable. On the broad working-parts section at the front it has a soft pad for resting on one’s forehead. The silicone is stretchy around the back so you can have it nice and tight if required.

Indeed, I found the Knog Bandicoot comfortable to wear and quite secure on my head. On the top are two buttons – or, rather, swellings in the silicone, indicating buttons underneath. One does most of the work. Hold it for a second and it switches the lamp on or off. Press it briefly and it cycles through the lighting modes. The other cycles whichever mode is engaged through four levels of brightness.

There are eight LEDs, with four across the front and four on the angled-downwards edge. In fact, the four across the front are slightly downward angled as well. Only slightly. When I did my best at holding my head as though I were looking straight ahead, the centre of the cast light was on the ground, about three metres in front of me. To make the lights shine out horizontal to the ground I had to tilt my head back significantly.

The centre LED is called “Spot”.  At full power it’s specified to produce 85 lumens. A smaller LED is on either side of it. These always operate together and produce a combined 35 lumens.  When “Combo” mode is engaged, all three of these are engaged, for a total of 100 lumens (increasing light sources doesn’t result in a simple arithmetic increase in output).

The fourth LED is an 8-lumen red one.

The four LEDs on the more horizontal surface are called “Reading” LEDs. They aim down at anything you have before you in a typical reading position. Between them, they produce up to 8 lumens.

The four reading light LEDs also act as the battery meter when it’s being charged. You can press one of the top buttons when the Knog Bandicoot is switched off and they – or some of them – will illuminate to indicate battery level.

Which brings us to the Knog Bandicoot headlamp’s battery and how it’s charged. If you press a certain area on the back of the silicone band, you can yank it off one side of the main electronics pod. That exposes a standard USB Type-A plug. Plug that into any standard USB power outlet – including that on a computer – and it charges.

Rather than retype it runtimes from the Knog website, I’ve just lifted its useful graphic here:

In brief, going for maximum brightness in front of you you’re going to get a couple of hours. But if you use on the front spot lamp on the lowest setting, you’ll get 17 hours. The “up to 80 hours” stuff is for the reading lamp on the lowest level.

Clearly the Knog Bandicoot is intended for personal illumination. You won’t be going spotlighting with it. With 100 lumens available, on a dark night it will only be hinting very vaguely at whatever may be a hundred metres away. You can make things out somewhat at twenty metres.

But it’s perfect for walking around, with it casting plenty of light three metres in front of you, with enough splash so that the area immediately in front of you is adequately illuminated. You can save a little power – add a little to effective battery light – by using Spot rather than Combo. But since Combo adds the two side LEDs, it tends to give a wider viewable field, bringing more of your peripheral vision into play.

The reading light had a fairly narrow vertical spread. I found I had to move my head so that the maximum brightness fell upon the lines I was reading.

I never really understood the point of red LEDs on headlamps. In case you want to develop black and white films, maybe? Anyway, if you have a use for it, it seemed to work well. And if not, well, you can always disable it, thanks to the control app available from Knog.

You can change the modes on your Knog Bandicoot if you download and install the Modemaker app from the Knog website. It’s available for both Windows and macOS. It’s still in Beta, apparently, but the Windows version worked on my Microsoft Surface Pro 2017.

Even if you’re perfectly happy with the way the your Knog Bandicoot works, do it anyway. That’s because you also use the app to update the firmware.

After you install the app on your computer and start it up, you just plug the USB plug of the Knog Bandicoot into a socket on your computer. It was instantly detected on mine.

What the changes the firmware made, if any, weren’t apparent to me.

As for the customisation, the app presents you with a list of modes in the order in which the mode switch cycles through them. You can delete any of them or drag them to change their order. Or you can drag in different modes. There are 18 available, including flashing ones, combinations of red with the others, or the reading, ambient and spot LEDs all on at once. There’s even one mode that flashes SOS in Morse code.

The Knog Bandicoot silicone headlamp is a bargain. It is extremely useful. It works the way it ought to. It’s configurable. And you can tuck it away into small spaces. Check it out.

You can read more about, or purchase, the Knog Bandicoot silicone headlamp here.

Features
Value for money
Performance
Ease of use
Design
Light and convenient
Configurable
Comfortable
Good value for money
Not as powerful as some
4.6