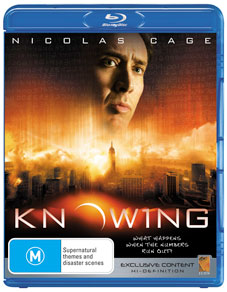 Another sci-fi vehicle for Nicholas Cage, Knowing again casts the gloomy thesp in a role that stretches credulity to the limits, that of Professor John Koestler, astrophysicist and MIT instructor.

Happily, Australian Director and part-time Ice Road Truckers extra Alex Proyas co-opts a couple of real-life professors of physics and astronomy behind the scenes to bring a certain veracity to the frankly bizarre onscreen proceedings, as well as recruiting fellow Aussie Rose Byrne in the pivotal role of Diana Wayland, a reluctant (aren’t they always!?) player in the drama that unfolds.

Based on the enduringly popular ‘end of the world but one good man stands in the way’ concept with a similarly uninspired script to match, Knowing places all its eggs in a simple but shocking late-stage ‘reveal’: not the dreadful exercise in gooey and quite literally corny bathos that follows on the heels of Koestler’s heart-wrenching decision and ends the film, but the significance of the last two letters in the cipher the film is built around. But one good idea does not necessarily a great film make and the over-use of badly integrated CGI to portray the various crowd-pleasing disasters makes it impossible to generate any empathy with the pitiful humans’ plight.

The extras are paltry, with the DVD version getting only a Director’s commentary, and the Blu-ray versions (there is a steelbook limited edition, but the steel case is all you get for your extra four bucks) offering two short ‘making of’ featurettes. The only highlight of the first is Lara Robinson, who plays both current-day Abby and the ’50s Lucinda, commenting that it was fun to play because Lucinda was “sad, and scary and weird” and then we cut to hair and makeup artist Lesley Vanderbilt, who takes scary and weird to a whole other level.

The second feature, Visions of the Apocalypse is also dry but notable for the appearance of the two aforementioned professors of physics and astronomy who quite gleefully recount the various methods by which all life on our planet could be prematurely extinguished, reminding us that even if we avoid all those events, the end of the Earth is a ‘sure thing’ in about 5 billion years. Cheerful.