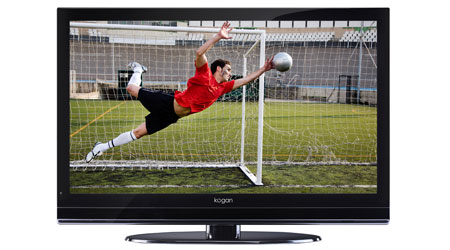 Less than $900, this Kogan TV still manages to include a motion smoothing frame interpolation system of the kind once seen only the most expensive of TVs. Plus it has a USB socket on the side.
The motion interpolation was a mixed blessing. It worked quite well with PAL DVDs, and managed to avoid imposing a glossy sheen over the image like many such circuits do. But it also produced a noticeable ‘heat haze’ around moving objects. The net result was positive in terms of overall enjoyment of picture viewing, assisted by a very naturalistic colour balance that steered quite clear of excessive saturation.
The TV reception was strong on digital TV, with both SDTV and HDTV producing good quality results.
With Blu-ray, things weren’t quite so good. With 1080p24 signals from Blu-ray, it offset the image about half a screen width to the right and about one eighth of a screen height up from the bottom.
But it accepted 1080p60 fine, and it clearly used the 120 hertz video processing to ‘reclock’ the video so that it ran smoothly on the screen. Presumably the output was at 120 hertz, but the characteristic jerkiness of 1080p60 was completely eliminated. So, for that matter, was the more subtle 1080p24 jerkiness, thanks to the motion smoothing system. Unfortunately, when the image was sharp, detailed and complicated, this processing sometimes became confusing, waving elements of the image around in a disconcerting way.
Again, this is nothing new, but the TV lacks an ability to switch off the frame interpolation, so you can’t do anything about it.
The USB functionality worked rather nicely. It played my test JPEG photos (with the colours a trifle overblown), MP3 (but not WMA or WAV) music files, and DivX, AVI and MPEG2 videos.
The review TV didn’t come with an energy star sticker, but my measurements suggested that it would be good for 2.5 stars and a 712kWh/year rating.
Overall
Features
Value for money
Performance
Ease of Use
Reader Rating0 Votes
Excellent value for money; True high definition display; Good broadcast TV picture; Smooth motion from 120Hz video processing; Multimedia features with USB
Black levels could be better; Can’t defeat motion smoothing; Can’t defeat overscan even on Blu-ray; Won’t accept 1080p24 input
3.8