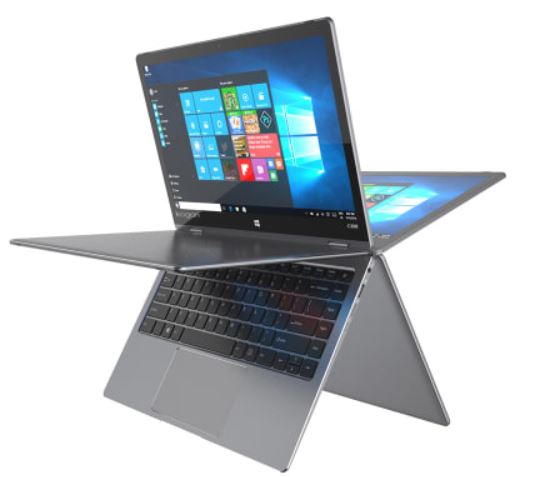 Kogan has announced a low-cost 360° convertible notebook at A$399 (pre-orders only).

Price will always influence sales decisions but as is often said, “Quality is remembered long after price is forgotten.”

With that mantra in mind, GadgetGuy has had a close look at the specifications to see what if any compromises you may have to make for a “Never mind the quality, feel the width” a.k.a. cheap purchase.

While we have not received the notebook for review, there are a few no-name Chinese ODM’s offering very similar configurations (and there is a strong likelihood that Kogan has sourced from one of these) so we can comment on them.

This is a four core, 1.1GHz (turbo mode 2.2GHz), Apollo Lake (technically 5th generation), 14nm processor first seen in mid-2016. It has a small 2 x 1MB L2 cache and was designed for lower cost mobile devices. According to my sources, it is the cheapest mobile processor still in production that will run Windows 10.

It has 4GB of shared, 1600, DDR3 ram with somewhere between 1-2GB available for program execution after Windows 10 has loaded. While Windows 10 will run in 4GB, far slower swap memory using the eMMC storage is used when RAM is full.

It has 64GB of eMMC (embedded Multi Media Card – a low-cost flash memory-based drive). About 20GB is taken up by Windows 10, Office 365 takes 3GB, and you need a few more GB for memory swap space and temporary files. It will fill quickly.

eMMC is very slow – a typical 64GB card will achieve between 10-20MB/s data transfer so it will be slow to boot and for disk intensive tasks.

There is an internal SATA3 2280 M.2 slot which can be expanded by up to 512GB SSD but remember that this will cost over $300 (the 64GB eMMC must remain as the Windows boot drive so the SSD will not give any system performance boost).

Kogan claims the M.2 slot will take 512GB but the ODMs say the total storage cannot exceed 512GB, e.g. including the 64GB eMMC and any microSD card.

Kogan claims “Stunning clarity and rapid performance. Stream your favourite shows and films, and view photos and browse the internet in greater detail thanks to Intel HD Graphics 500. The Kogan Atlas 13.3” C300 Convertible Notebook offers an immersive, Full HD experience that you will simply fall in love with.”

It has Intel HD Graphics 500 with a base frequency of 200Mhz. It uses shared system memory (about 1GB of the 4GB system memory).

Performance is only in the low-end segment and is not sufficient for modern games. In a RallyCross benchmark, it achieves 5.6 frames per second at 1080p. Older and simpler titles like Counter-Strike: GO, or Diablo 3 will run adequately.

It is a 13.3” IPS 1920 x 1080 screen – the colour gamut and sharpness depend on the panel manufacturer. If it is one of the current ODM offerings is will have a limited horizontal viewing angle, a warm white cast and low sRGB. It is a 10-point touch screen – the minimum required for Windows Ink support.

Having used this style of keyboard before keyboard flex (pressing one key means the others flex as well) will be noticeable. It is not a typist keyboard.

A stylus is provided, but there is no information on type or resolution. It is micro-USB chargeable (active).

The touchpad appears largish, but we don’t know if it supports two or more finger gestures.

The Intel processor supports the configuration’s 1 x USB-A 2.0 (max 60MB/s) and 1 x USB3.0 (max 640MB/s). USB typically achieves less than half the rated speed, and I would be surprised if they achieved even that.

There are two down-firing speakers in the base. There is no mention of watts RMS, maximum dB (volume) and THD (distortion). Given the slim design, it is unlikely that they provide any bass and favour voice (upper mid and treble).

Front facing 2.0MP will do video conferencing at 720p/30fps but not much more. It does not have Windows Hello or biometric login.

There is a Li-ion battery 5,000 mAh at 7.4V with a 12V 3A external charger. It should achieve 3-4 hours use and take about 4 hours to recharge. A far larger battery would make this more usable.

The article does not comment on Kogan business practices or the pre-order system where you pay in advance for the goods that are delivered at a future date after manufacture and shipping – using your money!

It is cheap because it uses older, superseded, entry-level technology – there is nothing leading-edge or premium about it giving advertising copywriters a challenge to make a silk purse out of a sow’s ear.

All it has to do is what a cheap notebook is supposed to do – to passably perform Windows 10 tasks albeit slowly.

I repeat this is a no-nonsense look at an A$399 (sell price), white label (not made by Kogan) notebook that ODMs sell to companies like Kogan from about US$200.

ODM Voyo offers a strikingly similar product to Kogan’s, but it recommends a 12,000mAh battery (at extra cost). It says that total storage supported is 512GB including the 64GB eMMC and micro-SD.

Acer made the Spin 1 convertible using the N3450 Celeron released early last year. It was critically panned for slow speed etc. It was not a commercial success and was later re-released under the guise of Spin 11 Chromebook.

Lenovo had a US$279 N3450 Celeron product for the education market, and it morphed into a Chromebook too.

Dell used this processor for an entry-level notebook but quickly went to the Intel m3 6th generation series that use half the power, twice the cache, have better graphics and can run fan-less.