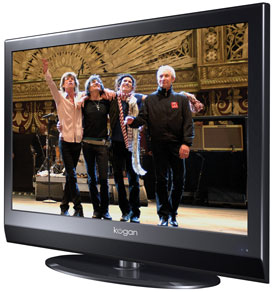 When HDTV was first being touted in Australia, its opponents warned that true HDTV televisions would cost $20,000 or more. And while not that expensive, when they first came in they certainly were extremely pricey. But here we are, in 2008, and web-based retailer, Kogan Technologies is offering a full 1080p high definition digital TV, complete with built-in HDTV tuner, for under $1,400.

What can I say but: incredible!

There are no easily accessible video inputs – all are at the rear, underneath a ledge, but all the options are covered, including two HDMI inputs. There is also a coaxial digital audio output ’round back, which ought to permit you to feed Dolby Digital from some HDTV channels to a home theatre receiver. The only problem is that the TV converts Dolby Digital internally to two channel PCM, so you lose discrete surround sound.

At this price, I was disposed to forgive quite a few performance weaknesses. But that doesn’t mean that I should gloss over them, or you may think you are getting more for your (modest amount of) money that you actually are.

So first, the HDTV tuner was rather disappointing. It produced a picture that was beset with softness, a marked loss of detail, and frequent blockiness. It really didn’t look like HDTV at all, even though I knew from the programming that it was.

The black levels of the display were quite restricted. Do not use the ‘Dynamic’ picture setting, as this pumps up the brightness from the backlight so much that even full black appears like something close to 50 percent grey. ‘Standard’ gave probably the best picture, but even under strong room lights some mottled patches of light from the LCD’s backlight glowed visibly through near the top of the screen during dark scenes.

Aside from that, the colour was quite good and highly configurable if you’re of a mind to tweak it.

Proper advantage is not taken of the 1080p panel. The reason is that the picture is always scaled up – even 1080p material being delivered over HDMI. This TV added a couple of percent of overscan to each edge of the picture, so that the edges were lost and detail unnecessarily softened. Yet, at the same time, using Blu-ray and HD DVD, the TV seemed to insert what looked like film grain into the image, making it noisy.

The TV supports full 1080p50 and 60, and operates smoothly at both of these. It also support 576i input over HDMI, but the deinterlacing is rudimentary so I suggest you use a good progressive scan DVD player. The preferable 1080p24 video is not supported by this TV (it will display it, but drops a lot of frames), which means that images from Blu-ray discs will appear with a certain jerkiness.

I did look forward to our time with this LCD TV from Kogan, especially as our experience with one of the company’s previous model – the Kogan X46 – was a good one and resulted in a complimentary assessment.

Unfortunately – and I really do hesitate to be mean – but we must recommend to readers that they do not purchase this TV. That you are reading this website suggests you are interested in quality, and this TV just doesn’t provide it.