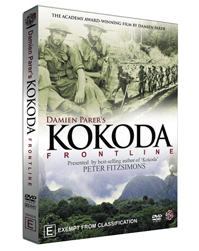 The story of this critical phase in the Second World War is presented through the eyes of legendary photographer Damien Parer and there is a lot of fascinating and rare footage on offer. The tale is narrated by Parer himself, as well as Peter FitzSimons. There is a lot of fascinating historical information as well. There aren?t any extra features, but the footage itself is at times pretty amazing. It is a poignant footnote that Parer died later in the war while filming a US Marine assault.