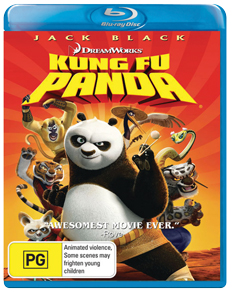 Based on DreamWorks Animation’s recently-released Kung Fu Panda movie, this game follows true ‘movie tie-in game’ tradition by recreating major plot points of the film to push the story along. But there’s also a lot of new, original content, including new in-game characters, to give players an experience beyond the movie – and it works.

To start with, the game looks great. Graphically, Kung Fu Panda himself and all the other animals look as endearing as in the film – I still can’t take the aggressive posturing of Tigress seriously, when she looks so fluffy and cute – and the animation and soundbites from Po himself are as funny as they are on the big screen.

The strangest thing, though, for anyone who’s already seen the film, is that your character, Po the Panda, is a very respectable kung fu fighter from the beginning of the game and your skills get better and better as you play through. In the movie, of course, Po is mostly hopeless at Kung Fu, and most of his ‘victories’ are achieved in a bumbling mess of ill-judged movements – by accident, in other words. Clearly, it wouldn’t make a very enjoyable game if the character you controlled was similarly clumsy, but since most of the film’s humour comes from this ineptitude, it’s an interesting move.

Motivation to keep playing, even if you’re not in the sub-12 yr old age group that will likely find this game most appealing, is maintained through the collection of various objects around the game world, then allowing you to ‘buy’ upgrades to your basic abilities – stuff like health, jumping, basic attacks, blocking – as well as to your ‘Panda techniques’, which turn out to be the more fun, silly manoeuvres, like the ‘Panda Quake, much like the famous Mario bum-slam move, and the amusing ‘Panda Stumble’, which sends him careening around the place in a curled-up ball. There are also a few alternative outfits to unlock, which you can wear right away for a bit of variety.

Kung Fu Panda is a ‘platform’ adventure game, meaning you do a lot of jumping from one point to the next, and even that’s more entertaining than usual here. Because Po’s, well, of a certain size, just getting up onto a ledge is a real effort, and so the game makers have exploited that to great effect. Accordingly, Po huffs and puffs and grunts as you push the button to make him climb or jump – and his big bottom wobbles convincingly as he does it!

At certain points, you switch to playing as some of the other characters from the film and these all present different challenges and have different moves to master, which can be quite fun. On the multiplayer side, there are some cool mini-game style brawling challenges, similar to Kung Fu Chaos, a spiritual predecessor in some senses, that may help give the title a bit more longevity.

So there’s nothing extraordinary, or even new, about Kung Fu Panda but it’s very beautifully realised in terms of graphics, it’s quite funny, and it has immediate appeal to the kids who’ll be picking up the box in the game store and begging their parents to buy it.