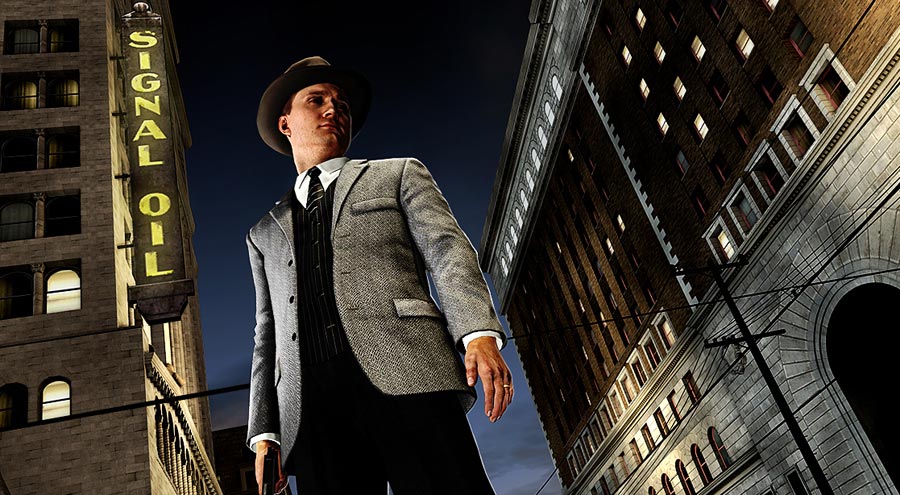 L.A. Noire, an action adventure game from the people who brought us GTA, is not your usual videogame fare. More exploration and discovery than run and gun, you play most of the game as a rookie detective freshly returned from a harrowing wartime experience, investigating crime scenes, collecting evidence and subsequently questioning suspects.

Most of the challenge lies in this last part; the interrogations have ‘branches’, with the option for the player to tag answers as  ‘lie’, ‘doubt’ or ‘truth’. A musical tone indicates whether you’ve chosen the correct path and the action – the dialogue in particular – plays out slightly differently for each response.

The game’s most outstanding feature is the extraordinary facial animation, with bodily movements that almost keep up, which looks utterly convincing. So confident is developer Rockstar that the virtual actors’ animation is accurate, the game forces the player to pay proper attention to the expressions of your suspects during interviews to determine whether they’re telling the truth or not.

While some of the visual clues can lack subtlety, there’s still a knack to watching your suspects as you question them, delving into your notebook to produce the correct bit of evidence and laying your findings out, which goes far beyond most games of this nature. You can restart a case you mess up, if you’d like to take another crack at it, although the checkpointing will place you right back at the very beginning – and, of course, the in-game stats counter keeps track of your failures regardless.

Aside from the ‘meat’ of the crime solving to complete, there are landmarks, film reels and newspapers to discover, 95 cars to drive and 40 incidental street crimes to tackle. That all results in about 25 hours’ gameplay, maybe a little more if you complete all the street cases – to give an idea, the game was showing 20% complete at the three hour mark, 70% at 17 hours and, for me, about 23.5 hours when all cases were complete.

The script is involving and entertaining and as good, if not better, than most of the filler on TV these days. I switched to a TV show after a few hours’ play and spent the next 30 minutes pondering the clues of the case I’d just left back in the L.A. Noire game!

Replay value, however, is questionable, as the case-based gameplay plays out the same way each time, save perhaps for the questions you didn’t ask the first time around, doing things in a different order or varying camera angles of the same scene. But these differences are largely cosmetic and wouldn’t motivate most players to play them through again.

The mechanics of playing the game aren’t innovative and become pretty routine after the first couple of hours – most of the cases seem to follow the same pattern of a woman victim venting her disappointment with her husband by propping up bars before being horribly murdered – but that’s not what this game is about.

The appeal is in the storytelling; not just the amazing visuals but the convincing script, which in my view is an early warning shot across the bows of Hollywood regarding the direction that movies will take in the future, where it will be possible to dispense with ‘live’ actors entirely.  Rockstar is already ahead of the game with downloadable content, too, making new weapons, clothing and, most critically, cases available now and over the next few months, which should assist with longevity.

L.A. Noire is not as free-roaming as GTA, but it’s an immersive and compelling gaming experience that is unlike anything you’ll have played.