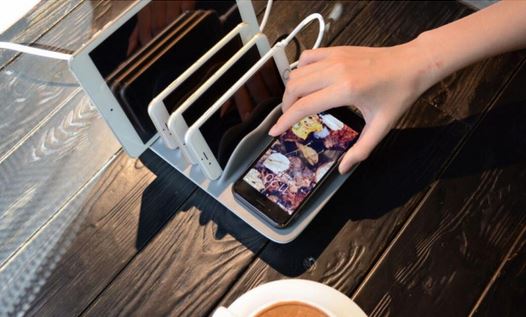 Its called “The Hills” reflecting the shape. Alas, the image on the website shows a forest green and the review unit is in a drab office grey. The official model number is PW-WCS04.

The Qi rating will slow charge (overnight) an iPhone 8/X, all Samsung Galaxy S series from S4 onwards, and a host of other Qi-enabled brands. If you want a faster charge you should look at 10W and 15W Qi fast chargers.

The concept behind “The Hills” is to be able to stack four smartphones or tablet devices between the crests, but in practice, it offers four dedicated 2A outputs eliminating the need for four separate USB chargers and its equally at home with devices placed beside it.

Please note that a USB Hub is not designed to charge multiple devices – a dedicated charger with levels of power protection like this is required.

The Qi 5W charger took just over eight hours to fully charge a Galaxy Note 8 from almost zero. So, its best used as an overnight charger and it intelligently charges and stops charging when the battery is full or if an error occurs.

It worked well through a Samsung flip cover – thin cases should not be an issue. A soft LED indicates Qi is active.

Each port is rated at 2A and can handle Android smartphones and tablets as well as iPads and iPhones. Again, this is standard charging – not fast charging. It took about four hours to charge the Galaxy Note 8 – twice as long as its dedicated fast charger.

Using a multimeter, we verified that four devices were supplied with 2A each.

It seems stable enough supporting phones and tablets up to 10”. The silicon surface reduces slippage.

After 24 hours under full load, the unit was still cool to touch and showed no signs of overheating.

A very useful device – saves power board clutter. Laser often have a range of useful and interesting accessories.

HDMI – because you are going to need to know