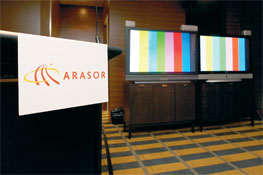 By this time next year we may have to choose between plasma, LCD and new type of TV powered by lasers, writes Valens Quinn.

Deciding between plasma and LCD TV is hard enough, but by Christmas 2007 there may be another flat panel option to consider.  A new type of TV technology powered by lasers promises to deliver more realistic images than current display technologies, be more energy efficient and cost less than LCD and plasma TVs of the same size.

Behind these claims is Arasor, an Australian optoelectronics manufacturer, and Novalux, the Silicon Valley-based makers of the Necsel Laser Colour light engine. The names will be unknown to most, but Mitsubishi and Samsung should ring a bell or two.

These are two of the world?s top eight electronics brands that Arasor and Novalux say have been taking an interest in laser TV technology, with the pair claiming that Samsung will be among several (unnamed) brands to present laser TV prototypes at the Las Vegas Consumer Electronics Show in January 2007. Consumer models, according to Novalux CEO, Mr Jean-Michael Pelaprat, are expected to be available by Christmas 2007 or in early 2008.