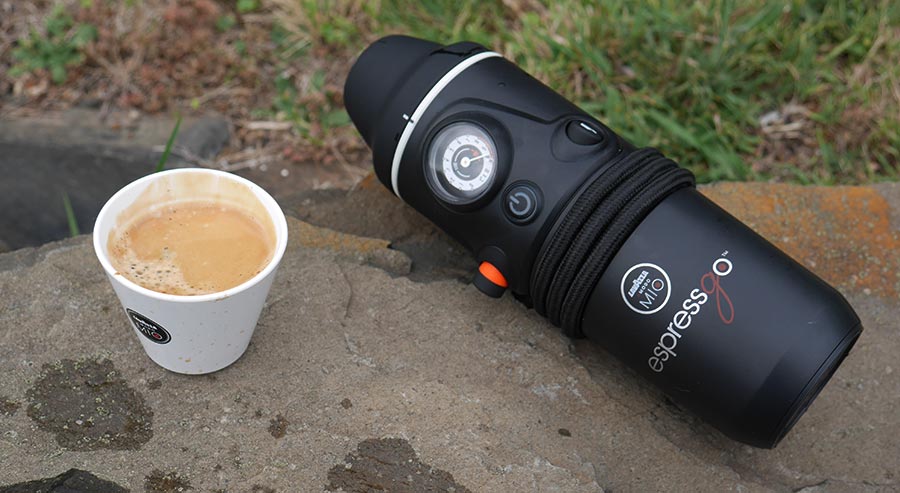 Coffee pod machines generally sit at home or work, but what if you could take them with you in a car? That is precisely what Lavazza is crafting with the EspressGo, the world’s first encapsulated coffee system designed to work inside your automobile.

Lavazza’s EspressGo is a unique machine, comprising of a small coffee maker inside a thermos made of rubber and plastic.

The machine has a 16 bar pump inside, and supports pods from the Lavazza A Modo Mio system, which can be found in supermarkets across the country.

Lavazza’s EspressGo is powered by a 12 volt cigarette lighter, but cannot be powered by any other means.

The water reservoir inside the machine takes roughly 50ml, which is enough for an espresso, and has room for one pod, which must be disposed of after making the cup of coffee before being used again.

Three buttons can be found on the machine, with the power button, a stop button to pause the pump and release system in its tracks, and an espresso release button that can only be engaged when the EspressGo is tipped upside down.

The EspressGo comes with a small coffee cup good enough for the 50ml espresso, a carrying case, and several pods to try the machine out with.

Coffee in your car? It probably sounds too good to be true for some people, and yet that’s exactly what Lavazza has done, teaming up with Handpresso to craft a small handheld machine that makes coffee quickly and easily, in roughly two minutes per cup.

Lavazza makes this possible by building a small encapsulated coffee machine in something closer to a thermos, the bottom section containing a 16 bar pump and pressure gauge, capable of taking around 50 millilitres of water and pushing it through a coffee capsule once it’s ready.

Out the other end, a brown liquid that many of us rely on will emerge, dripping and pouring into a small cup provided by Lavazza for drinking out of.

So how does this happen?

First you need a car, as the Lavazza EspressGo requires the 12V cigarette lighter found inside cars, taking its power from this port.

Open up the thermos-like machine, and fill it with 50mls of water, the level inside the machine providing an indication as to when the EspressoGo is filled. From here, you insert a Lavazza A Modo Mio pod, the top face down to press directly into the piercing prongs of the coffee machine.

Now you can close up the thermos with the portafilter, the top section used to pierce the pod from the inside, tightening up the lid of the thermos-like coffee machine, keeping the heat and water inside the portable coffee maker.

It’s worth noting that Nespresso pods won’t work here, and neither will those from either the MAP system or Nescafe’s Dolce Gusto, but if that doesn’t bother you, or you already have something else from the popular Lavazza system, you’re safe. Given that Lavazza has nine blends in its A Modo Mio system, you’d be hard pressed to complain about finding something similar to what you already consume.

Operation is relatively simple, though does require some room and attention, so don’t expect to be doing it while you’re driving. Rather, do it when parked, or if a passenger has loads of room to move and the car isn’t swerving, turning or swaying in the process.

To work the EspressGo, make sure it’s plugged in with the water and coffee pod inside the machine, and then hit the power button.

The EspressGo machine will spring to life, vibrating at the bottom as the pump heats the water, raising the temperature as per the gauge on the unit. After a minute or so, the vibrations will cease, but the temperature will continue to rise, making you wait roughly a minute more until the EspressGo beeps three times to tell you it’s time to pour.

At this point, you need to unplug the machine so you don’t inadvertently switch it on again, and rotate the thermos-like coffee machine so that the top faces down, ready to pour it into a small cup. Once the espresso release button is pushed, and this can only happen when the EspressGo is flipped upside down, the espresso will come out.

Testing it in our Volkswagen Golf, there wasn’t quite enough room to turn the coffee machine over and release the liquid java, not without a fear of dropping scalding hot coffee all over us, which is precisely what happened when we ran a test with water alone.

Let’s just say hot liquid anything isn’t something you want poured over you, so make sure you’ve either stopped or your passenger has enough room (and the car isn’t bobbing and weaving all over the place) if they’re pouring, otherwise there could be a potentially nasty and/or dangerous accident.

Once you get beyond this, however, the EspressGo is a relatively impressive unit, creating a small cup of joe with a lovely milky light brown crema to sip on that can be made within the small space of a vehicle.

Removing the pod from the machine could also be something a little problematic for some, as touching the coffee pod after the cup has been made will be very hot to the touch. The easiest way to get it out would be to wait and then undo the lid from the EspressGo, tipping the spent capsule directly into the bin.

Credit to Lavazza has to be acknowledged, mind you, as the company has not only included a box of 16 pods of strong coffee with the machine for you to play with, but also a carrying bag that takes the machine, the small cup, and several coffee capsules.

That last one — the carrying bag — makes the entire kit far, far easier to carry, with two straps to let you bring the machine and a few pods easily.

It’s also built quite well, feeling like a solid rubberised thermos that can sit comfortably in a car cup holder, which we suspect is the reason behind the design. Cup holders in the centre console will probably make the EspressGo fit better due to how cemented to the car these are, but we were still able to fit it in the higher cup holders of the Golf.

There are a few things that could do with some work, though, and one of these is the espresso button, which can be very hard to push.

In some ways, it’s a little too precise, especially while you’re sitting in a car. If you don’t hold the EspressGo right, mind you, hot water will leak from the side, and the espresso release button won’t be able to be pushed, leaving your fingers slick with hot water, and not your cup with hot coffee.

The Lavazza EspressGo is also only for short coffees, with no chance of a “lungo” or long coffee here. In fact, you’re pretty much stuck with a short coffee altogether, because that’s all it can handle.

There really is nothing like it, and Lavazza’s EspressGo does tread new territory has far as coffee machines go.

We can’t decide whether it’s mad or brilliant (settling in a Naked Geeks podcast on the phrase “milliant”), but it’s pretty impressive nonetheless, literally offering a proper cup of espresso when no café is in sight.

It’s easy to see a place for this machine in so many environments, whether the owner is an ambulance driver, police officer, someone going camping, or just a driver who loves their coffee.

If you love your coffee, and love it so much that sipping it should happen where ever you choose, this is a machine worth looking at.

Overall
Value for money
Performance
Ease of Use
Design
Reader Rating1 Vote
Makes coffee easily and quickly; Is literally the only way to bring an espresso machine with you; 16 bar pump isn't too far off what other machines use, and is one bar higher than the Nescafe Dolce Gusto system; Comes with a carrying bag;
Espresso release button can be pretty hard to press; No lungos (long coffees) here, only espressos or ristrettos;
4