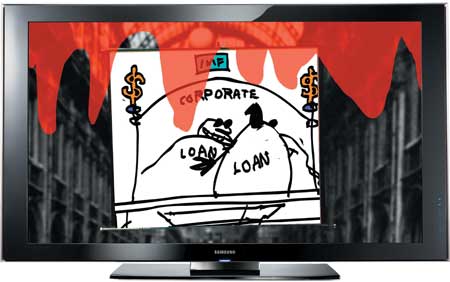 The race to provide consumers with the most astronomically nonsensical figures for contrast ratio in a television doesn’t show any sign of faltering, with Samsung countering competitor’s claims of ‘infinite contrast’ with a meaty 500,000:1 contrast ratio thanks to the new addition of ‘LED Smartlighting’.

The first LCD television to boast this LED Smartlighting technology, the F9 (rather gaggingly-termed ‘The Born Ultimate’ from Samsung’s PR firm) is claimed to be the world’s first 177 cm (70 inch) Full HD (1080p) LCD TV. And if that nickname doesn’t make you reach for your own private oxygen supply, the price might – at a staggering $69,999 the F9 is clearly intended more as a technical showcase, a willy-waving boast if you like, than a sensible consumer offering.

Still, if you have the cash, the LED Smartlighting feature, consisting of a host of LED backlights that switch rapidly on and off depending on the source images being displayed on the TV, means that there is far more accurate and appropriate control over the level of light output while you watch.