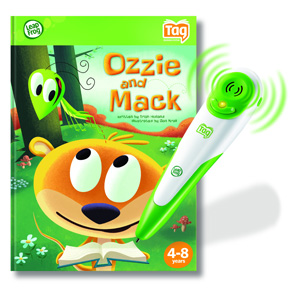 Children who can’t get inspired by reading should find Leapfrog’s Tag reading system quite appealing, but those who are just emerging as readers may find its shelf life a touch limited.

Leapfrog has been in the business of what are essentially talking interactive books for some time, and the Tag product is largely an evolution of that idea. The basic tag system comprises the Tag pen – a thick, rather texta-like device with an optical reader in one end and two AAA batteries in the other, and a small inbuilt speaker. The tag pen is used to read and play along with Tag-compatible books.

The basic Tag system comes with an introductory reader, Ozzie and Mack, but Leapfrog also offers a range of classic children’s stories, as well as licensed books featuring Spongebob, Kung Fu Panda and others. As the child reads through the book, tapping on words or key areas will prompt the Tag pen to talk, whether it’s reading out the words in the book, or playing simple games through it.

One of the interesting differences with the Tag is that unlike previous Leapfrog products, the audio for each book isn’t supplied with the books. Instead, you download it from Leapfrog online. The Tag Pen can hold up to five books at once, but you’ll have to buy additional titles (RRP: $21.95) separately in hardcover tomes before downloading the audio from Leapfrog.

The first thing you need to do with any Tag compatible book is download the audio to the Tag pen. This was a very simple process using Leapfrog’s own software (PC or Mac), although we were somewhat disappointed to note that while other territories have over 20 Tag books available, Australia currently only has 13. You can download audio from any Tag book and listen to it, even if you don’t own it, which we found a little unusual. If you want the full range of activities available with each title, though, you’ll still need to stump up the cash for each book.

Our test subjects started at the bottom range of the Tag’s suggested age group – four years – as well as a six-year-old child capable of rudimentary reading. Leapfrog places the Tag within the four- to eight-year-old category. The four year old was far more smitten than the six year old, who rather quickly flipped through the supplied Ozzie and Mack book before working out where all the tag sensitive areas were. A single playthrough, and she was done.

This highlights our one real concern with the Tag (and it’s true of most audio book systems), in that there’s only a limited period of time from which your children might benefit from having it compared to, say, a regular book.

Clearly, those struggling with reading may find it a real boon, and our four year old continued to want to play with it for quite some time, but that’s at least partly because it was a ‘new toy’.

If you’ve got a four- to six-year-old reader struggling with becoming engaged with reading, then the Tag system, along with other teaching tools, is a decent idea. Struggle is relative, however, and those who are simply just emergent readers might do better than to be distracted by it.

Overall
Features
Value for money
Performance
Ease of Use
Reader Rating0 Votes
Can hold audio for up to 5 books; Very portable
Possibly limited period of relevance
3