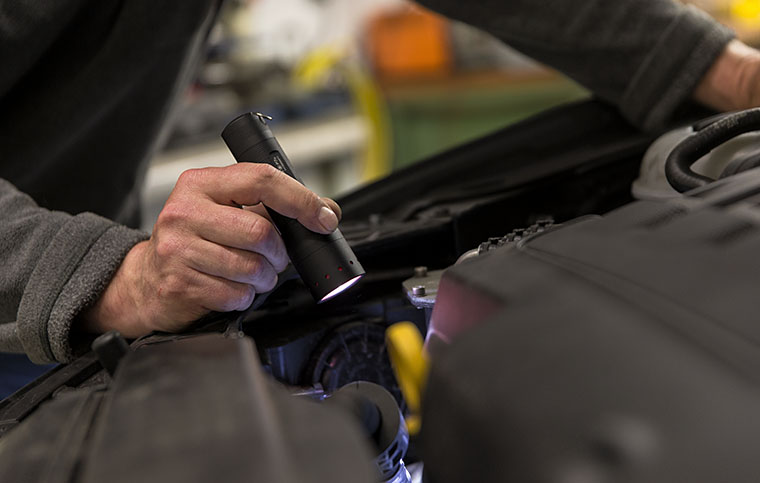 Ever since high power white LEDs were invented, they’ve become the flashlight “globe” of choice, thanks principally to their high efficiency. Batteries last longer. Much longer. But not forever. One of the best known companies operating in the quality end of this market, US-based LED LENSER, is seeking to address this with the rechargeable LED LENSER P7R compact torch.

LED LENSER has an enormous range, from keyring torches delivering 13 lumens and costing $16.50, through to an $1158 behemoth capable of delivering 3200 lumens, or nearly 250 times more light (LED LENSER says that this one “puts most car headlamps to shame”.)

The P7R is somewhere in the middle of the range, positioned near the P7 series, which use four AAA batteries and offer around 320 lumens. But the P7R is good for up to a thousand lumens. Unlike the old P5 (single AA) and P3 (single AAA) I’ve used these past few years, the P7R isn’t just an on/off affair. It has a three position output switch allowing three levels of brightness: the aforementioned thousand lumens and, at the other end, a mere twenty lumens (a bit more than those keychain models).

LED LENSER says the battery is good for two hours at maximum power, and forty hours at minimum.

Given that with a rechargeable battery you’re kind of stuck if you’re away from the charger for a long time, the ability to trade off between brightness and longevity is very reassuring.

The charging is also fairly flexible. It comes with a charging cradle, and is apparently held to the charging terminals magnetically. It is also compatible with being charged from a USB adaptor in a car, from a computer and so on.

Being a LED LENSER torch, you can control the beam as well, able to focus it with one hand (“Smart Light Technology”) into a tight beam that can stretch a couple of hundred metres or into a smoothly lit disc for close up work.

The LED LENSER P7R torch is also IPX4 rated, which means that it can withstand the splashing of water.

It’s 166mm long and 37mm in diameter and weighs 210 grams. The recommended retail price is $231 and the warranty period is five years.