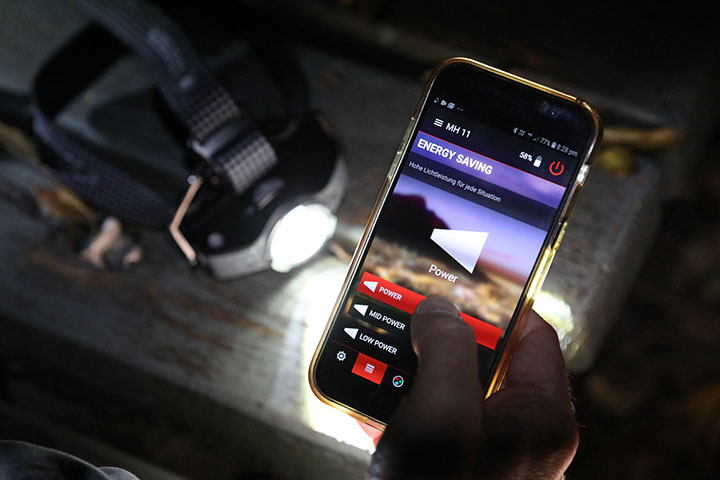 LEDs are rapidly taking over the world of lighting. Thanks goodness. Amazingly efficient, they are especially suited to portable applications. And that brings us to Ledlenser, which dominates the quality end of the flashlight market. Here we’re looking at the Ledlenser MH11, a smart headlamp.

A headlamp is a portable, battery-powered torch designed to be worn on your head. It allows you to work or walk in the dark, while leaving your hands free. The Ledlenser take on that basic scheme adds the following:

The body of the headlamp is fairly wide – around 90mm – and moderately deep at 60mm from the forehead rest to the front of the lens housing. That might suggest a tendency to tug down and forwards, but that proved not to be the case. Wide elastics traps – 26mm wide – hold the assembly on your head. I liked the material. It was soft on my skin and held everything firmly, without ever feeling uncomfortably tight.

The weight is back-loaded, with the battery near the rear. The forehead plate has a soft rubbery ring around it. At nearly 70mm by 50mm, it spreads the load well. The Lenlenser MH11 body can swivel up and down freely within that, but again is tight enough not to droop. It can be removed if you need to use it hand-held for some reason.

The whole thing, straps and all, weighs half a hair under 180 grams.

The Lenlenser MH11 is an outdoors unit, so it’s weatherproof. More formally, it’s rated at IP54, which means that it’s “Dust Protected” sufficiently to avoid any interference “with the satisfactory operation of the equipment”, according to the Wikipedia description. And it’s safe against water jets projected “from any direction”. Don’t go swimming with it, but a rainstorm is fine.

The lens can be rotated by perhaps fifteen degrees, extending it to change the spread of the beam. It’s quite the range. Standing at one metre from a flat surface, the vaguely square spot of light was around 200mm wide at its tightest focus. It was somewhat square because the white “Xtreme LED” it uses is square-shaped. Wound to the maximum width the now-round spot was 1350mm wide.

That comes to angles of between 11 degrees and 53 degrees. Use a tight spot to project the light further. A wide setting is good for close work with your hands.

Ledlenser rates the output at between 10 lumens and 1,000 lumens and the “Lighting Range” at between 30 metres and 320 metres. I can understand the distant range measurement, but the close one? There’s no reason why you can’t spread the beam and lower the brightness and use the unit up very close.

The battery life of the Ledlenser MH11 is rated at between four hours and one hundred hours, depending on use. The battery is a removable cylinder rated at 3.7 volts and 11.84Wh. That translates into 3,200mAh. Since it’s removable, you can buy a new one to replace it should it get tired. If I’m reading the website correctly, I think a new one is $49.95.

Have you ever used a cheap LED torch and had it start flickering unaccountably after a few months. That’s unlikely to happen with the Ledlenser MH11 because it comes with a five-year warranty, seven years if registered. Batteries being what they are, it’s only covered for 24 months.

The battery is not the same size (nor voltage) as any disposable one, so you can’t make do with alkalines in an emergency. I guess that could be a drawback for those going far from the beaten track. But do note that the charge cable, which snaps on magnetically, plugs into any standard 5-volt power source. Including the battery pack you may have with you for your phone.

An indicator LED shows for two seconds whenever you switch on the unit. It glows green, yellow or red to indicate battery state.

When I’ve finished writing this review I feel I shall almost be qualified to interpret hieroglyphics. Without a doubt, understanding the double-sided page of infographics – they’re the extent of the printed instructions – was the most challenging part of using the Ledlenser MH11.

That’s in large part because of the wealth of functions, and the fact that for the most part you have just one button to control it all. So, using different modes involves holding down the button for various lengths of time, awaiting the sought feedback. Some can be as long as 12 seconds (that gets to you to the colours).

Or you can use your phone to control it, which is much, much easier. I shall return to that shortly.

The standard mode of operation is invoked just by pressing the button once. This is on top of the unit, easily found by your hand, and sprung at a level heavy enough to resist accidental operation, but not so heavy as to be hard to use.

When you press the button, the lamp lights up at a brightness it judges suitable for the circumstances. Specifically, if there’s little light it will be fairly dim; if the environment is bright it will also be bright. Then you can press the button more times to cycle through low power, medium power, high power and flash. In any of those, if you press the button after that mode has been in operation for more than five seconds, the lamp just switches off instead of cycling.

There’s also a “Boost” mode, which is a little brighter than even the regular high-power mode. This switches itself off after ten seconds.

This is a powerful lamp. Night hunters will want to judge for themselves whether it offers sufficient reach for them. I have no doubt the light casts up to 320 metres, but at sufficient brightness to clearly make out a target? Apart from that, I find it hard to think of anyone who would find the light inadequate for purpose.

To the right of the main lens, viewed from the front, the Ledlenser MH11 has another fixed, small lens behind which are a red, a green and a blue LED. Hold down the control button for a dozen seconds and you switch the unit to RGB mode. A tap of the button cycles through the colours (and off). Again, leave it on one colour for five seconds and the next press of the control switches it off.

Because there are three LEDs sharing one lens, they throw in different directions: red up high, green in the middle and blue down low. Their outputs aren’t specified, but they are quite bright. I could imaging using the red one in a dark room, but you’d want to check that the light wavelengths involved really don’t ping any of the black and white film’s light-sensitive elements. More likely, they’d make excellent high-visibility markers.

Red lights can be useful in certain hunting circumstances because some animals can’t see it. But I don’t think that the brightness of the red LED in this unit is high enough for this purpose. However the company says it’s also good for preserving your night vision, while a blue light is good for night fishing, and green helps cut through fog.

The Ledlensor MH11 can connect to a phone via Bluetooth using the Lenlensor Connect app. It allows everything to be controlled, and adds some other functions that could be useful in some circumstances.

The app connected quickly – two or three seconds tops. In addition to the various functions accessible by button presses, through the app you can:

The app need be no longer connected once it has loaded profiles and such. But the app must remain the focus screen on your phone to retain a connection.

The Lenlensor MH11 headlamp is highly capable, seemingly robust and really well thought out. The control app is far more than a gimmick, allowing you to semi-automate the unit and easily access certain advanced functions.

Whether for close work after dark or for navigating through the scrub, the Ledlenser MH11 should do the job. It’s available, and you can read more about it, at the manufacturer’s Australian website here.

Features
Value for money
Performance
Ease of use
Design
Comfortable
Powerful
Long battery life
Charges from standard USB power
When not using app can be complicated to operate
4.4