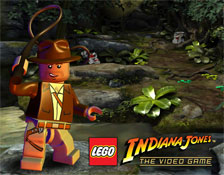 ?LucasArts and TT Games are setting the bar for next-generation family entertainment with the LEGO Star Wars franchise, and our incredible relationship continues with LEGO Indiana Jones,? said Jim Ward, president of LucasArts. ?In addition to providing the quality bonding time inspired by any good family game, LEGO Indiana Jones delivers something a little different for everyone. Parents will enjoy the humorous take on some of their favourite movies, and their kids get some rousing action/adventure gameplay that may also introduce them to Indy?s original adventures for the first time.?

?It has been a real joy to work with LucasArts on the LEGO Star Wars games. Indiana Jones is the perfect character for the next LEGO-based videogame adventure,? said Tom Stone, director at TT Games. ?Indy also presents us with wonderful and memorable cinematic moments. The boulder scene of Raiders of the Lost Ark in LEGO is hilarious!?

Watch the trailer for this upcoming game, by clicking the graphic below.