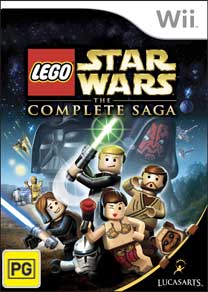 LEGO Star Wars: The Complete Saga is a compilation title, in essence, combining both previous LEGO Star Wars games into a single title, allowing players to play through all six of the Star Wars movies in the one game. In case you’re not familiar with the LEGO treatment of the Star Wars universe, we’ll quickly recap here. All the graphics in the game look as if they’re made from LEGO (obviously, perhaps) and that instantly gives the titles a totally unique feel. However, it’s the way the game plays that has given this series so much of its charm.

Developer Traveller’s Tales has turned the seminal sci-fi series into a hugely entertaining comic romp through the Star Wars universe, injecting the games with a degree of humour that may not have been in the original movies but sits perfectly with the portrayal of the LEGO characters in the game versions. The games are basically platform adventures, where players take control of varying Star Wars personalities and work their way through the levels fighting, collecting and solving puzzles. Traditional fare for a ‘platform game’. But when things explode, there’s a resultant shower of LEGO bricks, when characters ‘die’, they literally fall apart and if you need to fix or build something, you get your character to madly ‘piece together’ the item brick by brick, as if using one of the toy sets.

So the ‘LEGOisastion’ of the Star Wars franchise has been a huge success – and this compilation version is more of the same, in a literal sense for the PS3 and Xbox 360 versions, since they’ve been seen before, although now the game benefits of a high resolution lick of paint as the main improvement. With the Wii version, reviewed here, you’ve obviously got the unique Wii control system to consider, and for LEGO Star Wars:TCS, the debut brings the ability to thrash your Wii Remote around to simulate the movies’ light sabres. This is really what you’ve been waiting for, if you’re both a Star Wars fan and a Wii owner, and the first few minutes waving the remote around like the futuristic swords is quite a bit of fun.

That fun doesn’t really last, sadly, because the implementation isn’t very good, and you find that there’s no subtlety in the movement at all. So, rather than master deft but decisive sabre strokes to incapacitate your opponents or smartly deflect laser blasts heading in your direction, you end up just randomly hacking the remote around in front of the console’s sensor bar, to an unvarying and unsatisfying effect.

So the opportunity with the Wii Remote is badly missed, and no gamers who’ve played the original titles are going to find anything really compelling here, but if the LEGO Star Wars series is as new to you as your Wii, you’re in for a treat. It’s bizarre to think that a kids’ toy as simple and, frankly, urbanely functional as LEGO can translate so humorously to a videogame but it has, and it’s brilliant.

This review was conducted on the Nintendo Wii platform, but the game is also available for PlayStation 3, Xbox 360, PlayStation 2 and PC.