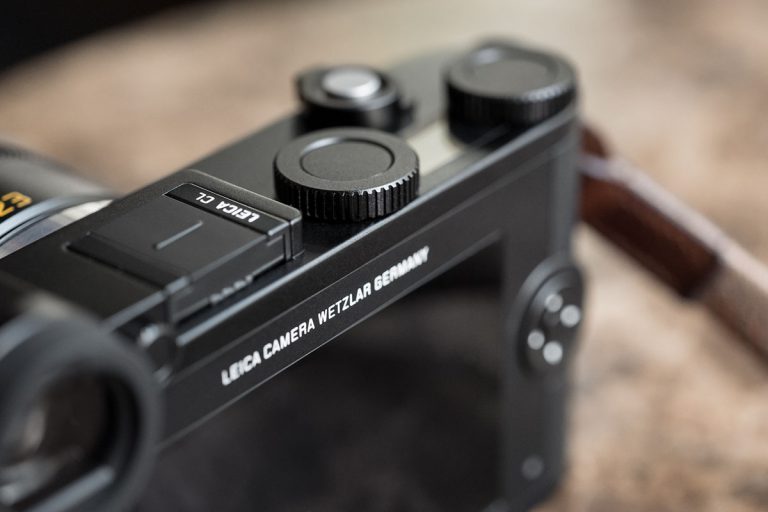 Queen Victoria Building, Sydney, 24 November 2017: German camera maker Leica has launched its new Leica CL camera. Based on the APS-C system, it employs most of the advanced internals deployed first in the Leica TL2 camera, which was released four months ago. But it returns to a more traditional layout, informed by the original Leica “Liliput” camera from 1914. Like the “Liliput”, it is made in Germany.

It’s not just styling changed from the TL2. The Leica CL has a redesigned system of control, with assignable rotary dials, and a newly developed 2.36 million pixel electronic viewfinder with automatic switching between it and the 1.04 million pixel, 75mm, touch sensitive rear display monitor.

But the CL is very much smaller than a full frame model. At the launch one of the Leica people had his own full frame Leica M series camera. Side by side, the CL looked very similar, except far reduced in size. And weight. The camera body with battery in place weighs 403 grams. The body is constructed from aluminium and magnesium and finished in black, with a leather wrap. On the top is a quite small LCD display showing basic shooting information.

The camera uses Leica L-Mount lenses – the same as those used on the TL2 – but it can also be used with Leica M and R lenses using an adaptor. The lenses for the Leica TL2 are equally for use with the CL. There are four prime lenses, with focal lengths from 18mm to 60mm, and three zoom lenses.

It has a contrast-based autofocus system which Leica says is extremely fast. There are 49 metering points. Despite the intentionally sparse controls, the camera is full of all manner of functions and modes, along with the kind of intelligent stuff expected from a modern camera, such as focus tracking.

And there’s WiFi built in. I noted that the rear monitor on the camera doesn’t have a hinge to facilitate taking pictures at weird angles, but with the remote operation via the iOS/Android app, you can control the camera even from a distance. Photos can also be transferred via WiFi.

The camera uses SD cards for storage, and the extra contacts of UHS-II cards are supported for faster data transfers.

Sadly, there were only two cameras to be passed around the dozen or so of us at the launch, but the few minutes I spent with the camera impressed me. It was interesting the way the minimalist design – and even the omission of markings on the dials – didn’t detract from the camera’s power. The learning curve is perhaps a little longer, simply because the camera doesn’t remind you as much of the functions, but with a few minutes of use it starts to become quite intuitive.

And you can just dig into the menus for more complicated stuff. Menus are menus, regardless of the camera in which they appear. They proved easy to navigate. The touch sensitivity of the screen appeared to be switched off while the menus were up, so it was all arrows and “OK” buttons for getting around them.

The camera felt very nice in my hand. The electronic viewfinder was bright and clear, and a tiny dial to its side adjusted for my eye sight. The automatic switching between rear monitor and viewfinder was fast and reliable.

Likewise for the focus.

There was a good sense of smooth solidity when taking off and putting on a lens.

The SD card and battery both reside in the space covered by a door in the base. The 1200mAh battery is made by Panasonic and is good for 220 photos.

Also speaking at the launch was Nick Rains, a professional photographer (with credits including Australian Geographic and Sports Illustrated) and a brand ambassador for Leica. He showed a number of photos he’d taken in recent weeks using the camera.  What particularly impressed him was the ability to dial up the ISO to a high value so that hand-held photos could be taken in sub-optimal lighting conditions, with grain not becoming intrusive. Several of the photos ran to ISO values of 3200, and even on the A2 prints he brought, grain was barely visible, even on relatively flat aspects of the picture such as a darkening sky.

Arlo Essential Spotlight camera is part of the new breed