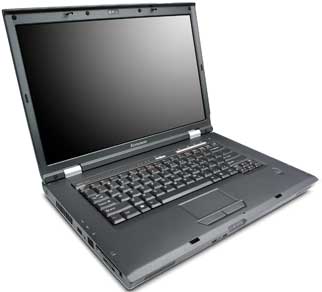 IBM historically hasn?t been known as the company that puts the F in Fun, but when Lenovo took over its PC business, we had high hopes that the product line would shed some of its stodginess. We’ve been sorely disappointed. Although it’s billed as a dual-purpose device, suitable for the home and office, the N200 is still very much a bland business notebook, styled in the now traditional black and magnesium and looking very much like the Lenovo design department has been on holidays for the past six or seven years. Sure, there are nods to consumer features, including a large screen, integrated web camera, an OK graphics processor and support for analog TV output, but by and large it’s a product that will look more at home in the office than in the lounge room.

Given its business focus, it’s no surprise that there are considerable security features in the Lenovo. On top of the fingerprint scanner and TPM (trusted platform module, used for BitLocker and other security tools), the Lenovo comes with a range of custom security, administration and networking tools. Although we daresay that more than a few of these are redundant in Windows Vista, some, like the network setup Wizard are quite nifty.

The notebook has a moderately sized 15.4 inch screen, which strikes a nice balance between portability and size. The screen is crisp, although it did seem to have limited viewing angles. The notebook’s internal speakers have all the depth of a standard clock radio, and if you plan to do anything with this notebook you’d better use headphones. The volume was also very low – so low that when we tried a video call using the integrated microphone and camera, we nearly had to press our ear to the keyboard to hear what the other person was saying. And that was with volume at max! On the other hand, the 1.3 megapixel camera produced good quality video.

Its other features can hardly be called progressive: there’s no ExpressCard slot, though there is a flash card reader. It has USB and FireWire, but not digital video outputs. If you want to connect it to something with a larger screen, you have to use VGA or S-Video. For burning discs it has a DVD-RW drive, and its 120GB hard disk isn’t going to hold a great deal of multimedia content on it. Of course it supports standard wireless and Ethernet networking, as well as Bluetooth.

The N200 comes standard with a powerful processor, the Intel Core 2 Duo T7300. It uses a GeForce Go 7300 processor for graphics, which is a relatively entry-level processor and not really suitable for 3D gaming – but it should handle most video tasks just fine. The model we received came with 1GB of memory, but we’d recommend expanding that to 2GB.

To its credit, Lenovo does tend to get the basics right: the keyboard and glide pad feel about right, uncomplicated and spacious, and suitable for getting things done on the notebook quickly.

If you’re looking for something a little consumerish, it’s clear that Lenovo shouldn’t be your first port of call. Even its most multimedia-friendly notebooks are designed first as business devices and their features and capabilities reflect that. The N200 is a fair business notebook – utterly bland, but completely serviceable. It has a nice integrated camera, quality security features and moderate-to-good specifications. It’s not heavy, has a screen that’s good enough to watch the occasional movie on and can be had for less than $2,000.