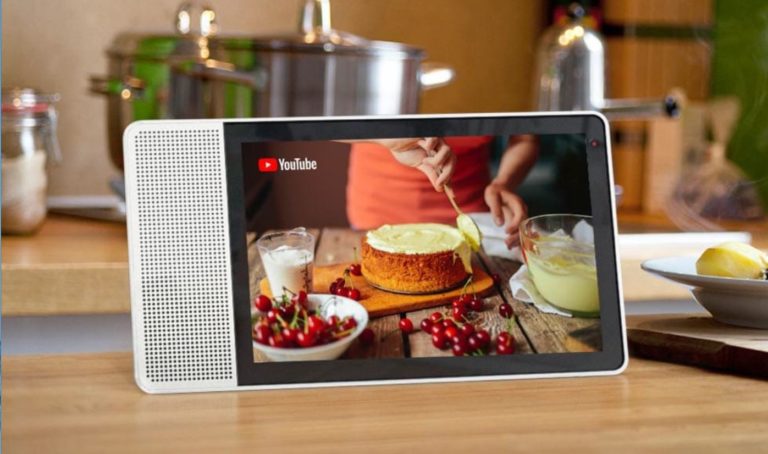 The Lenovo Smart Display speaker proves beyond doubt that two senses – hearing and seeing – are is the best way to use Google’s voice Assistant – OK Google.

Voice control is still a little new to us all. Although everyone who starts using it becomes a convert. “OK Google, what is the weather?” Well, Lenovo’s Smart Display will show it graphically and offer many alternatives to get more information.

Lenovo’s Smart Display comes in an 8” and 10.1” colour touchscreen versions. The smaller is ideal for tighter spaces on the bedside table and the larger for kitchens benches. Both share the ability to be used in portrait (for video calling) or landscape mode (for everything else).

We put the 10.1” Lenovo Smart  Display through its paces and think that it’s a great addition to the $219 Google 7” Home Hub.

Why an addition – why not competition?

What is Android Things OS?

Android Things is essentially Android embedded into a device. It has most of the Android features including over-the-air operating system and security updates, full compatibility with Android devices and Google Home (including auto-discovery), Bluetooth and LoWPAN (Low-Power Wireless Personal Area Mesh/Weave Networks Wi-Fi), and the ability to load drivers for add-on hardware like camera, mic arrays, anything. Currently, it works with Qualcomm SDA624, SDA212, and MediaTek MT8516 SoCs.

Developers will embrace it as it uses the same programming tools as Android apps do. Hardware makers will use it as it allows devices to be bought to market quickly without the expense of a lot of R&D – it is all about design. Google is promising up to three years’ worth of upgrades and security patches as well.,

You should prefer an Android Things device over a proprietary OS if only for updates and greater future functionality. At this time LGs superb sounding WK7 (review here) and JBL Linkview use the OS.

The voice assistant world comprises Google Assistant, Amazon Alexa or Apple Siri. The later is part of Apple’s walled garden and currently does not have a speaker/screen. Sure there is also Samsung Bixby, LG ThinQ and others but these are now mostly for access to machine level commands by Google or Alexa (skills).

Amazon Alexa has the EchoShow and Echo Spot that like Apple, revolve around tightly the Amazon shopping ecosystem. As one wit put it – “Money talks”.

Google Assistant is part of the Google search ecosystem and to that end is widely adopted by smartphone and tablet makers – about 85% of these devices run Android. But it extends to Android Auto, Android Wear (watches), Chromebook, Android TV, and further. It is the most ubiquitous system on the planet and has apps for iOS, macOS, Windows and Linux (requires Python 3 support).

I make the point that the Lenovo Smart Display can do everything Android Things can do – there is little differentiation except at hardware, features and marketing level.

The Box has a nice bamboo finish just like the speaker inside it. It’s a classic wood look yet totally in keeping with modern décor. Website here.

The Lenovo Smart Display is different. It has already gained a cult following in the US for its Bamboo finish (10.1”) and not conforming to the typical boxy smart display. It also has a manual shutter for camera and mic – for privacy.

In brief, it can do everything Google Assistant can do, and where there is supplementary video content, it can display that. For example, if you ask who Australia’s Prime Minister is, up pops ScoMo and offers several prompts is to learn more.

Web content needs to be updated for both voice and supplementary video information. Let’ just say that from this point forward most content will be suitable. At present recipe and cooking, sites abound.

Or you can watch YouTube videos or audio or being a Chromecast device; you can cast to it.

Video calling using Google Duo is as easy as entering your phone number, and you can have live and encrypted video calls with anyone in your contacts list. It is rating very well and is even available on iOS. Because it uses, Wi-Fi calling can be free. At this stage, it is for calls to one other phone at a time, but Hangout group functionality is coming.

Finally, it has all the Google Assistant features like Calendar, Maps, Search etc.

Pretty good for a 2” 10W speaker with two passive tweeter ports that help overcome the frequency limitations of smaller speakers.

Maximum volume is 85dB with surprisingly little distortion. Hints of bass creep in at around 80dB and continue to 500dB. Mids are flat (good) strong to 10kHz and then treble drops off. It is a warm and sweet, easy listening sound signature. You can get a little more bass and treble from Google Home app.

We did not test the 8” version, but I suspect it would lose a bit of bass and treble giving it a more mid-focus that is fine for clear voice.

GadgetGuy’s take. Lenovo Smart Display is the next evolution

I have been using OK Google for a few months, and it has become indispensable growing from a mini in the bedroom several speakers scattered throughout the house.

Adding a display opens up a depth to voice commands that I didn’t know it needed – until I used it.

Features
Value for money
Performance
Ease of Use
Design
Looks great and a little different
Crisp, accurate display but a little more glossy than Google Home Hub so avoid bright lights
Image quality leaves Alexa Show for dead
Adding a visual component to OK Google is what Google Assistant needs
Far better sound than expected - not audiophile standard
Has a camera and Google Duo is a really good feature (portrait mode only)
Google Duo may become my default way of communicating
No keyboard means some commands cannot be qualified enough to work – use your smartphone
Could do with tighter integration to YouTube
4.6