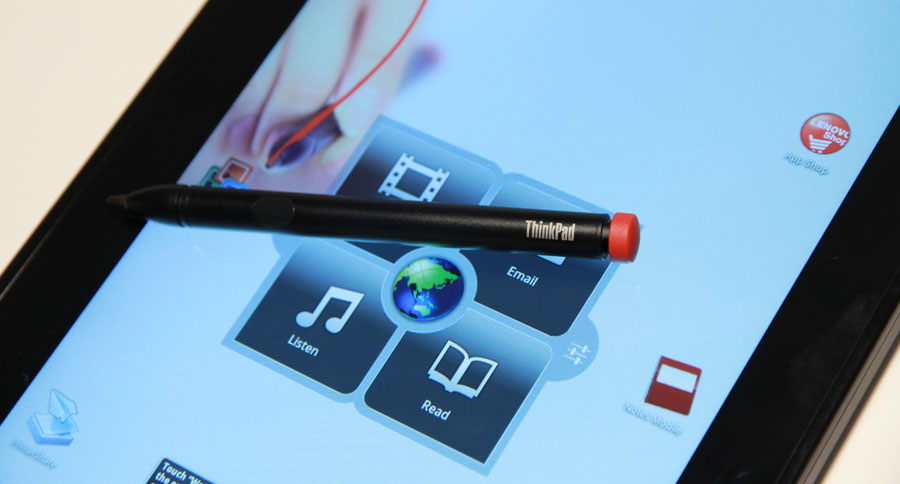 Lenovo’s first tablet to compete in Australia is the ThinkPad Tablet, a device that pairs the design of the company’s pro-level notebooks with a stylus-supported touchscreen.

Sharing the matte black finish of the company’s business notebooks, Lenovo’s ThinkPad Tablet is a bit of a Plain Jane.  A glowing red dot on the “i” in “ThinkPad” on the back of tablet adds  a  bit of pizzaz … but only a bit.

At 730 grams and 14mm deep, it’s not the lightest or thinnest device on the market, heavier and almost one-and-a-half times thicker than the iPad 2. Build materials also aren’t as strong, with plastic and glass used in this tablet.

The front is a fairly standard 16:10 frame of black surrounding a 10 inch touchscreen, all covered by Corning’s scratch-resistant Gorilla Glass. The LCD screen uses the high quality In-Plane Switching (IPS) display technology, which allows for good viewing angles and strong colour recreation, similar to the IPS panels seen in the Apple iPad 2 and Asus Eee Pad Transformer. Resolution is rated at 1280 x 800 pixels which is standard for this screen size.

Under the hood, it’s pretty much the same technology we’ve seen in every iPad competitor this year. Lenovo has equipped the ThinkPad Tablet with the NVidia Tegra 2 dual-core processor, 1GB memory, 32GB storage, Bluetooth 3.0, and WiFi 802.11 b/g/n.

Because this is targeted at the business user, Lenovo has thrown in good connectivity options, including an SD card slot, 3G SIM card slot, mini-HDMI, and a full-size USB port – useful for plugging in computer peripherals and external hard drives. A headphone jack is also provided, supporting headphones with microphones attached.

MicroUSB is present on the bottom edge of the tablet, and is used for both data transfers and charging of the tablet. A proprietary connector can be found next to the microUSB, designed specifically to connect to Lenovo’s accessories, including the desktop dock and folio keyboard case.

The OS of choice is Google Android Honeycomb, with an already up-to-date version 3.1 installed here. Lenovo has customised the bottom controlling icons of Back, Home, Menu, and Recent Applications, while also throwing in a handy favourite apps shortcut system.

Some of these icons have even been given physical hardware buttons, with the bottom of the ThinkPad Tablet sporting Home and Back buttons on the bottom right. The bottom left is home to a rotation lock and a web browser button. This is significant, given that Android tablets normally feature no front physical buttons at all, and should make it easier for first time users.

Also of significance is what’s in the top right corner of the tablet. Here, Lenovo has bundled in a battery operated pressure sensitive digitizer, or in other words a stylus able to be used for drawing and touch-operations in place of your fingers. This isn’t just for giggles and doodles, though; special software for recognising handwriting performed with the stylus is included for interpreting your scribbles into words.

Cameras are also present here, with a 2 megapixel suitable for video conferencing on the front and a 5 megapixel shooter on the back. No flash is present on either of these.

While not the thinnest tablet we’ve seen, the ThinkPad doesn’t feel extraordinarily heavy for its size. The weight is spread fairly evenly, but holding it in the middle will help ensure it doesn’t topple in your hands.

Turning it on for the first time, we found the screen to be very bright and viewable from practically any angle, the colours constantly clear with no sign of wash-out.

Battery life is fairly standard here, with a max of a day’s use before you need to recharge. We love that Lenovo has nailed the charging for the ThinkPad, with support for microUSB charging out of the box. Unlike other tablets with either proprietary charging connections or power bricks with specific wattage requirements, the ThinkPad Tablet can charge off of the same 5W USB charger your Bluetooth headset or Android smartphone uses.

The usability of the tablet is very similar to other tablets running Google’s Android Honeycomb OS, with few changes applied here. Lenovo has changed the colour of the always present soft buttons, shifting the Google blue to a now much clearer white, while adding a speech bubble button in the middle for accessing your favourite apps in a pinch.

Lenovo has also added its own application shop, effectively providing you with another source of apps, some of which have been designed specifically for the functionality of the ThinkPad Tablet.

Quite possibly the most intriguing part of the ThinkPad Tablet package is the stylus. Located in the top left corner of the screen, the stylus allows you to not only control the tablet without getting fingerprints on the screen, but also handwrite notes and scribbles directly on the tablet.

The bundled FlexT9 software allows you to scribble your thoughts onto a space on the virtual keyboard for automatic translation. The software struggles a little bit here though, often combining several words into a single senseless word. For example, “Hello my name is”, became “Hollows’rel;” or “Francis”.

We had more luck with another included program called “Notes Mobile”. This application offers you several digital lined notebooks with both transcribed writing and scribbled writing. In this app, the transcriptions were often dead on the money, translating our notes into text that we could later send in an email or to a printer. If you know you’re the only one who can read your writing or you like to draw things as you take notes, a second option allows you to jot and draw, without transcribe function.

This note-taking application makes the best use of the stylus on the ThinkPad Tablet, although it’s not a completely bug-free experience, and you may experience some lag and crashes here.

Those bugs echoed across the ThinkPad Tablet, and despite the professional angle, we have to say that it’s not the fastest tablet to hit our test bench.

Swiping between the several home screens yielded slight lag, as did running applications. Even going back to the home screen from within an app could take longer than five seconds, surprising us thoroughly. Most of these issues could easily be fixed with a patch, but we’re not sure if or when that will be applied.

You can also see that Honeycomb’s menus haven’t quite been designed for the portrait orientation Lenovo is going for here. Application menus often don’t stretch down the length of the screen and sometimes force you to switch back to a landscape orientation.

Oh, and the red light illuminating the dot in the “i” of “ThinkPad” never turns off, even when the device is on standby.

Lenovo has come up with an interesting concept here, modifying the tablet in a way that will have real appeal for some buyers. Performance-wise, we’d have liked more, and look forward to updates that will optimise the system to make it more responsive.