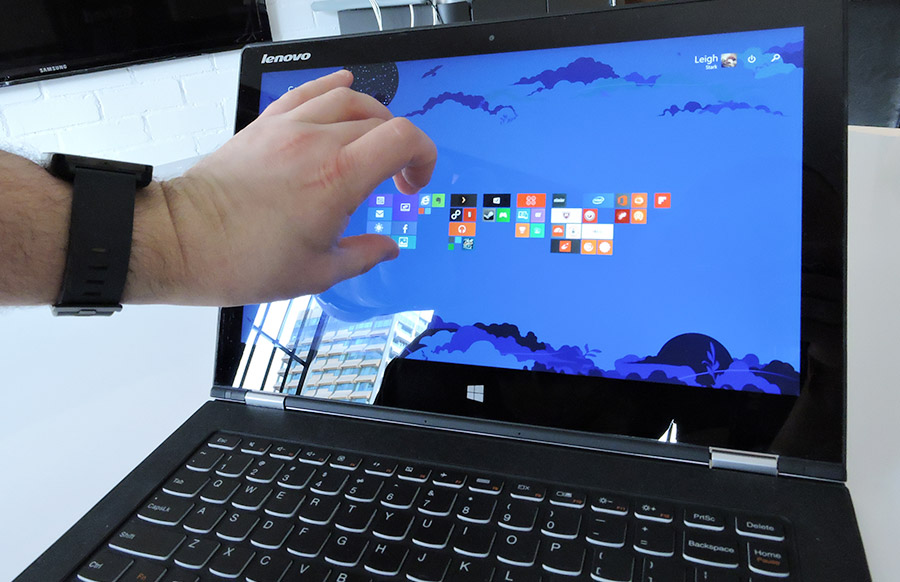 Lenovo can be quite playful with its computers, and has come up with some good designs before, but in the Yoga 2 Pro, it’s showing us that laptops can act like more computers than just the lunch box variety we’re all used to.

Not sure if you want a tablet, a laptop, or an entertainment system? Lenovo might have something for you, coming in the form of the Yoga 2 Pro, a model in the Yoga range that we once saw launched by celebrity Ashton Kutcher, who is apparently an engineer at Lenovo, or so we’re led to believe.

Unlike that computer which ran Android, the Yoga 2 Pro is a Windows machine, with Intel’s fourth-generation Core technology working away, running an Intel Core i7 4500U processor clocked at 1.8GHz and paired with 8GB RAM.

A 256GB drive works alongside this, too, and there’s an SD card slot if you’d like to read memory cards or expand the storage slightly.

Connections on Lenovo’s Yoga 2 Pro are relatively ordinary, with 802.11b/g/n catered here — no 802.11ac, we’re afraid — as well as Bluetooth 4.0, one 3.5mm headset slot, a lone microHDMI, and two USB ports, one of which is a USB 3.0 while the other is a USB 2.0 supplying charge for devices that are running out of battery life.

Speakers can be found in the laptop, as can a 720p HD webcam, with Windows 8.1 64-bit found installed, and a few programs as well.

Buttons can also be found too, with the power button sitting next to a recovery button if something goes wrong, and a rotation lock button towards the middle and sitting next to a volume rocker. And of course, there’s a keyboard — the obvious buttons on a laptop — with backlighting behind them, sitting just above a wide touchpad that is also a big button.

A power pack is found in the box, utilising Lenovo’s proprietary yet reversible plug.

With a name like Yoga, you have to expect a machine that likes to move, shifting position and adapting to different form-factors, and in this day and age, that sort of thing is now possible

These days, we want our laptops to be tablets and our tablets to be laptops, and that is precisely what the Lenovo Yoga 2 Pro has been designed to act like, with a special hinge for the screen to make the computer work like a regular conventional laptop (screen perpendicular to the keyboard), screen back at an angle and standing on a desk like a tent, and even flat reproducing the usability of a tablet.

That’s the idea of the Yoga, bundling these positions into on very thin package, with a pleather finish around the keyboard and a look that exudes professionalism, though not quite to the extent of Lenovo’s IBM-inherited ThinkPad line of computers.

The aesthetics are still good here, though, with a simple black interior for the keyboard, touchpad, and the frame around it, with a silver look on the lid and undercarriage of the machine, both of which retain an almost rubberised finish that is easy to grip, so you don’t have to worry about the computer falling from your hands any time soon.

Open the machine up and switch it on, with the power button on the right edge, next to a screen lock button and a few centimetres away from a volume rocker, all of which will help when you’re using the Yoga 2 Pro like a tablet.

Within a few seconds of powering the computer on, you’ll see the 13 inch screen come to life, showing crisp colours from nearly every angle, and some excellent clarity thanks to the high DPI display, sharper than the Apple MacBook Pro 13 Retina’s display, with 276 pixels per inch for Lenovo and only 226 for Apple.

That clarity helps on this display, with the strong fuller-than-full HD res showing up in text in Windows 8.1, and helping to make things pop off the screen. Indeed, it’s even better than Toshiba’s Kirabook from last year, which was the first PC to show PC makers how it’s done, so we’re pleased to see there’s been some progress here.

On the performance side, the Yoga 2 Pro’s reliance on Intel Core i7 processors means it can handle most of what you can throw its way, with some image and video processing, regular office work, web surfing, and even the odd game here and there. At one point, we even found we could run the first “Bioshock” title, which didn’t provide the best graphics under the sun, but did manage to show the Core i7 and Intel HD4400 graphics grunt.