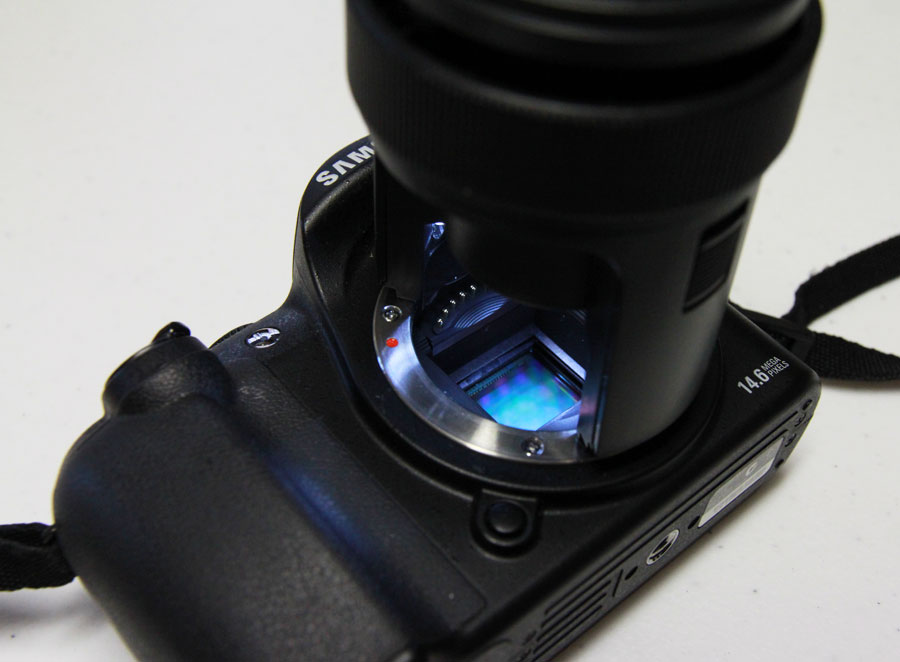 One of the burdens facing owners of digital SLR and interchangeable lens cameras is dust. Known as “dust bunnies” in the industry, these little particles can leave marks all over digital images. And while many cameras provide some level of inbuilt cleaning system to combat this, they typically can’t shake free bigger chunks of dust from the sensor.

The two cleaning methods offered by LensPen’s sensor cleaning kit comprise a blower and a loupe with carbon pen.

The blower will remind old school photophiles of the blower brush they will have used to blow air onto negatives to remove dust. This is much the same, albeit without the brush.

The LED loupe option is for the more stubborn dust, the sticky stuff that just won’t budge, regardless of how hard you squeeze the blower. It magnifies and illuminates dust particles on the sensor so that you can then remove them with the LensPen, a plastic stick topped with a small soft carbon compound.

The package also contains instructions on how to use the kit, six 1.5 volt batteries (three of which you’ll need for the LED loupe), and a felt pouch for keeping everything in.

How to use it

If you’ve got a digital SLR, you’ll need to expose that sensor of yours to clean, so detach the lens, head to the menu and find the mirror lock up setting, which is usually located in setup menus. If you’re unsure where it is, check the manual, or if you’re running out of battery power, you set up an exposure for 30 seconds. This should leave the mirror up long enough for you to do the job.

Owners of Micro Four-Thirds cameras and other small interchangeable lens cameras don’t have a mirror of course, so just remove the lens and you’re ready to go.

Once you’ve got the body open and detached,  you can start with the blower. Hold the camera with one hand, lens-mount facing down, and squeeze the blower to force air up from the bottom and onto the sensor. A few good squeezes of air with a couple of seconds between each should be enough.

Turn the camera off, throw a lens on, and see if the dust is gone. If it isn’t, it’s time to mount up with the LED loupe.

For this method, you need to lay the camera on a flat surface with the exposed lens mount facing up. Sit the loupe over the sensor and turn the LED on, lighting up the sensor. From here, you take the LensPen’s cap off and swipe it carefully over the sensor, removing dust that you see as you look down the loupe.

So does it work?

The answer here is a yes, although you probably won’t have to get out the carbon pen and LED loupe as often as you think.

Most of the dust we’ve encountered on sensors has been easily removed using a blower. We’ve used other blowers in the past and the one provided by LensPen is certainly strong enough for the task, while still being small enough to fit in a kit bag.

The LED loupe and carbon-tipped LensPen works well enough, but the near-surgical nature of it is off-putting.

For years, we’ve been told that nothing should ever touch the sensor in a digital camera, and that even professional camera technicians should approach with caution. And here we are, all of a sudden, being told that it’s fine.

Provided you’re careful with the LensPen, the sensor cleaning isn’t terribly dangerous, but you still have to watch what you’re doing through the LED loupe.

A professional sensor clean can cost between $30 and $120 depending on where you take your camera. The ability to do it yourself will save some money and time, and $80 is certainly an easy spend for those with a camera bag of accessories and pretensions towards serious photography. For less ambitious shooters, a standalone blower ($20) might be all you need.

Overall
Reader Rating0 Votes
Comes with an extra set of batteries for the LED loupe
Can be a bit daunting cleaning the sensor directly after you’ve been told for years never to touch the sensor
3.5