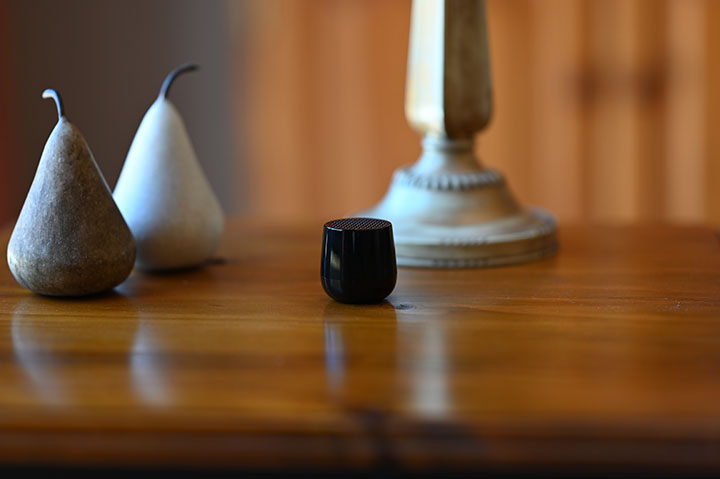 Okay, confession: it was the sheer cuteness of the Lexon Mino Bluetooth speaker that caught my eye. A couple of months ago my wife and I were in a touristy shop called “Made by Others” in Moss Vale in the NSW Southern Highlands. It sells fashions and curios, and there was this row of tiny little speakers, finished in shiny metallic colours.

I had no hopes for great performance, but they were so pretty I asked the proprietor for the distributor’s information. And, so, here we are with the Italian-designed Lexon Mino Bluetooth speaker.

Tiny. I’ve included a fifty-cent coin in one of the photos for scale. From the top the Lexon Mino is circular with a perforated grille across its top. It’s a hair over 33mm in diameter at the top, broadening slightly to a maximum of 37.5mm. It stands precisely 37mm tall. And it weighs just 32.7 grams.

It’s available in Black – that’s the colour of the review unit – but even cuter in a deep red, a metallic pink and a gun-metal grey. That’s what I saw in the shop, but I see that there are now dark green and dark and light blue varieties. I think the construction is plastic, but it does look like spun aluminium.

The reason they are so cute is because Lexon is really a design company, not a consumer electronics company. Indeed, right on the front of the box it says, “Design by Maneula Simonelli & Andrea Quaglio”. The company also does some other Bluetooth speakers, luggage tags, a stylish compact power bank and a “Miami Scent Sensory Oil Burner”, whatever that is.

On the bottom is a button for switching the speaker on or off (press and hold) or to set up for pairing (hold for longer). But it also doubles as a shutter release for the camera app of a paired phone.

I frequently put phones in stands to take shots and it’s very hard to tap the button without making the phone wobble. Hooray, here’s the solution.

On one side near the bottom is the USB socket to charge up the unit. Surprisingly, it uses USB Type-C, a most welcome development. A short cable is provided with the speaker. It takes half an hour to charge. There is no status indicator LED on the unit.

Battery life is two hours, so says Lexon. I say at least that. I played the thing at near full volume for well over two hours before it finally gave up.

Inside is a tiny amplifier rated at 3 watts output. There’s also a microphone built in. That allows the Lexon Mino to be used as a hands-free speaker.

Listening to the Lexon Mino

A high fidelity loudspeaker this isn’t. Of course, it couldn’t be, not at this size.

What it does do is sound noticeably better and significantly louder than the speaker built into your phone. Right at the moment it’s playing Miles Davis’ album Bitches Brew, which is streaming from Spotify, and doing a fair enough job of it musically. I’m not familiar with the music, but enough of it is being delivered for me to follow it and to enjoy it. There’s no bass to speak of, but neither does the speaker sound particularly tinny.

It works, and that’s all one really needs to say about it.

But, ah, well, I have the equipment here so why not measure it?

I would characterise the output as, to use a fancy word, bimodal. There’s a peak in what passes for bass from the Lexon Mino speaker at 550 hertz. Below that the output drops away rapidly at 18dB/octave. Above 550 hertz it also drops away, more gently, to bottom out 9dB down at around 1,500 hertz. Then the output rises again to another peak at around 6,800 hertz. Above that it wobbles around a bit, falling away sharply above 15,000 hertz. Here’s what it looks like:

But these things are best not considered in isolation. I was feeding music from Spotify and my NAS using my Huawei P30 Pro phone. It’s got pretty good sound for a phone. So, how do the Huawei’s speakers measure? Its bass peak was at 1,000 hertz! But it was only 6dB down at 500 hertz. Again, it fell away to bottom out at 1,500 hertz, then it was back up for a few jaggie peaks in output before dropping away at 10,000 hertz. Here:

I’ll tell you that the Lexon was much easier on the ears than the Huawei phone’s speakers.

The Lexon Mino is a fun little speaker that will improve the sound of your phone somewhat. And it’s so very cute.

You can see the various Lexon Mino speakers, and purchase them from, here. You can read about the many other Bluetooth speakers we’ve reviewed here.

Features
Value for money
Performance
Ease of use
Design
Reader Rating3 Votes
Cute
Better sound than a phone
Can use as remote shutter release for your phone’s camera app
4.3