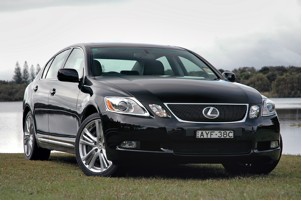 The debut of the new Lexus GS450h performance hybrid is expected to create a new group of luxury hybrid vehicle advocates who will help build an understanding of and future demand for other models.

On the outside there is very little to distinguish the GS450h from the rest of the GS line. Only the GS450h rear badge, side HYBRIDD badges and distinctive 18-inch wheels set this apart from the GS430. Inside the cabin, however, a Power Meter that gives the driver ample opportunity to get involved in the hybrid experience replaces the ubiquitous tachometer.

Importantly, the GS450h delivers an additional benefit to the environment reduced emissions. The GS450hhs ADR 81/01 CO2 emission rating is 186g/km a similar rating to a 4 cylinder car. A conventional vehicle of similar performance to the GS450h would have a CO2 rating in the 280-300g/km range.

Hybrid vehicles have unique advantages in city driving situations due to the stationary idle and initial take off being operated completely under electric power only. The GS450h emits nothing from the exhaust when the car is stationary.

Hybrid technology how it works

Hybrid technology combines an advanced internal combustion engine with electric motor technology, all managed by intelligent electronic control systems. And all, of course, manufactured to the Lexus legendary quality and reliability standards.

The creation and management of electric power is integrated with a specially developed battery and the intelligence of the hybrid system provides maximum operating efficiency, safety and comfort.

The new Lexus uses regenerative braking to save energy. When the brake pedal is depressed a generator connected to the wheels is put into action and converts kinetic energy from the vehiclees motion into a reusable form of electricity. This electricity is then stored in a high-voltage battery. This function recaptures up to 30 per cent of otherwise lost energy.

Regenerative braking recovers energy and hence significantly improves the fuel economy and emissions of a hybrid vehicle, further enhancing the appeal of the hybrid for city driving.

To add to the extensive list of features in the hybrid sports sedan, Lexus, for the first time, offers customers the opportunity to purchase custom suitcases to fit perfectly into the GS450h boot compartment. The integration of these features means the interior remains uncluttered and spacious.

As you would expect from Lexus, the GS450h is a technology showcase. The safety and comfort technology in the vehicle includes the Lexus Pre-Collision System, radar Active Cruise Control, Adaptive Variable Suspension, the latest generation of Lexus Vehicle Dynamic Integrated Management (VDiM), ten airbags including driver and front passenger SRS knee airbags and rear-seat side airbags.

As the Lexus GS450h debuts in Australia as the worldds first luxury hybrid sedan and with more Lexus hybrid vehicles set for Australian shores, the hybrid revolution is here to stay. The perception of vehicles powered by electric motors is very different to the reality here are five common myths about hybrid technology explained.