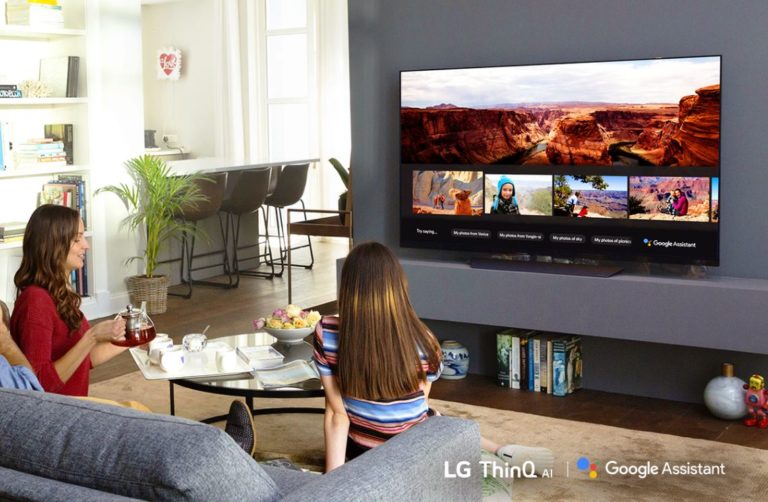 Google Assistant is now available for all LG 2018 ThinQ TVs they OLED or UHD LCD. They can now act like a giant tablet adding new visual depth to Google Assistant.

It can also control all the LG compatible connected soundbars as well as some IoT devices.

There is quite a lot of tech behind this. First, there is the hardware (and that is why earlier TV models can’t use Google Assistant). Then the interface between LG’s ThinQ AI and Google Assistant

To use Google Assistant, simply press the microphone key on the LG Magic Remote and issue a command. The request routes to LG’s servers to see if it is something that ThinQ can do. If not, it goes to Google.

ThinQ is our hardware interface that works across all LG ThinQ devices. We did not want to duplicate what Google already does with the Assistant and its massive language and search resources.

Apart from using the remote, you can also use a Google Assistant speaker like LG’s WK7 (GadgetGuy review here). That requires an extra step, “OK Google, tell LG to open Netflix …”

You can use an LG TV as a straight TV – no data collection. To use its smart features requires you must agree to our terms and conditions. We use this data as part of a global ongoing product improvement program. For example, if we see one function used more than another, we may change the menu layout to make life easier. It is all anonymised, and we don’t sell that data.

When you enter the world of Google Assistant, indeed any voice assistant and you agree to its term and conditions they apply to whatever you do with the device.

What that means to the layman is that Google (or Alexa or Siri et al.) knows what you are watching, where it came from. They use that data to do what they do best – target advertising to you.

To use Google Assistant on LG 2018 ThinQ TVs

Owners of LG 2018 TVs will receive it as an over-the-internet update. Make sure your TV has Wi-Fi or Ethernet connectivity firsrt.

If required go to Setup and press check for updates. Google Assistant should then appear in the ribbon command bar.

What can you do with it?

Anything that you can do with a Google Assistant speaker. LG 2018 ThinQ TVs add a visual component. For example, you can ask it to find a dinner recipe, and it will show an image and step-by-step instructions.

I was impressed at the work that has gone into the interface. It is logical and allows the magic Remote to act as a cursor to select further options.

You can also use voice to do things like open a web browser, adjust the picture settings, go to a channel, search for content and ask questions about a film’s cast.

It is also possible to control IoT devices like lamp, kettles and other connected devices.

The only caveat is that Google assistant is linked to one Gmail account so while others can use voice controls the owner needs the Netflix, Spotify etc., linked to their account.

Its skills are not as advanced yet as Google Assistant. We will try to support all mainstream voice controls. We are all about making the best ThinQ TV or home appliance, not trying to set up a Google or Amazon!”