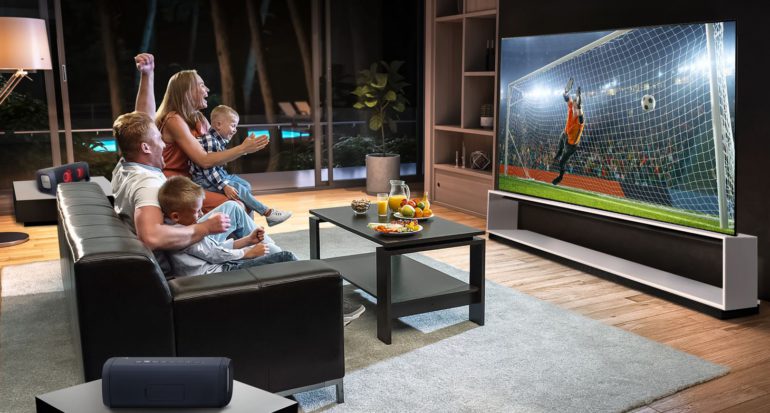 The LG 2021 TV range is finally here, and it is superb. The entire range – OLED A, C, G Evo and Z; the Q NED (mini-LED coming Q3) and the NanoCell (Quantum Dot) all share the impressive new webOS 6.0 technology and advanced hardware not seen on other TVs this year.

* Most of the LG 2021 TV range support full Dolby Vision and Atmos. Its main competitor does not, instead of decoding Dolby Vision to HDR10 that completely ruins the experience.

Essentially all models (apart from entry-level) have similar video and sound. As you move up, the processors get faster, and backlights get brighter. This is kind of good, better, betterer, and best situation. Note the table only rates within the technology. For example, it is not implying that the NANO91 is as good as the QNED96 or OLED G1

Prices and specs subject to change

LG had a tough time last year – not. It sold practically every 2020 TV, soundbar, and everything in the COVID fuelled buying spree. That its 2021 TV range is so late in arriving and the admission that it did not get as much stock it would have liked means that early buyers will pay full-price, and late buyers hunting for a bargain may not find any stock.

We only have one complaint about LG (and its the same with most TV makers) – a 12-months warranty on any device costing a few thousand dollars is inadequate. LG’s response is that Australian Consumer Law protects the consumer for breakdowns that are out of warranty.

To wait for Mini LED or not – hmmm?

We wrote a guide to Mini-LED, and I have to say that adding a stronger backlight to old LCD technology only exacerbates the LCD limitations – blooming, response times, etc. LG doesn’t make the Mini LED panels – they come from Chinese maker BOE and LG add the electronics and webOS. We saw an engineering sample of the 75″ QNED91 beside the 86″ Nano91. Yes, the Mini-LED was brighter, but the image quality was no better. Mini-LED is a step forward for LCD panels for sure, but it is nowhere an OLED challenger. It will have a niche in the 8K market where you can get a 65/75″ for $5599/6599.

Edge-Lit – for the masses.

The A1 is entry-level, and frankly, it is quite good enough for Dolby Vision and Atmos movies and sport. It is not a gamer’s device. Note there is also a B1 OLED   in 55/65″ for $3399/4599 that appears very similar to the A1 series but adds HDMI 2.1 (HFR), BFI, AMD Freesync, VRR, NVIDIA G-sync and 40W speakers. It would be the minimum OLED standard for gamers.

The C1 is what everyone will focus on. It has everything and perfect for gamers.

The G1 Evo means the next-generation OLED panel, and it adds an extra layer of green pixels. Yes, it’s a little brighter – not perhaps enough to justify the extra $600/1000 (65/75″). But its gallery design and slim wall mount included may tip the scales. And there is an attractive optional Gallery stand (and cable management system) that may appeal.

We also heard about the 4K rollable 65″

It is available to order at the bargain price of $130,000 – I bet Gerry Harvey takes five!