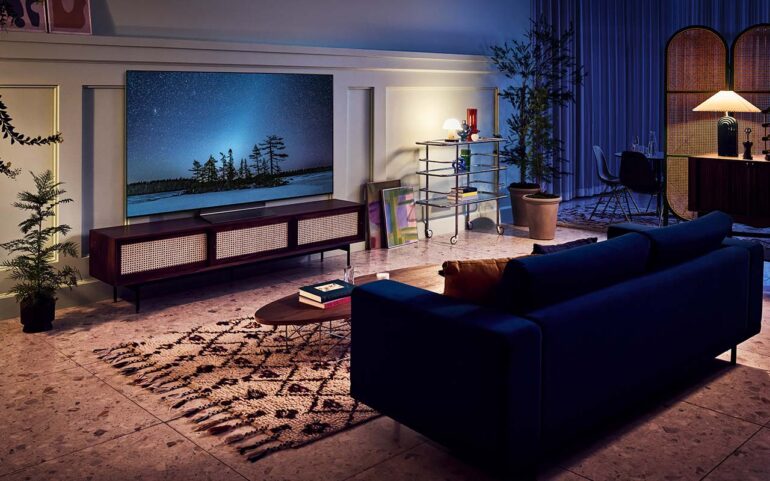 LG has revealed its latest range of TVs to be released in Australia, with no less than 42 models rolling out in the coming months, including upgrades to some of its most popular displays.

One such TV is the C2 OLED, the latest version of the go-to C1 unit from last year, which comes with the latest generation LG OLED evo technology. Produced via a new manufacturing process, this tech is designed to enhance display brightness to help produce images with greater clarity and detail. Also benefitting from improved OLED panels is the new G2 OLED TV range of TVs, housing the Gallery Edition of LG OLED evo technology.

Both the C2 and G2 series also house the latest Alpha 9 Gen 5 AI Processor powered by deep-learning algorithms aimed at producing optimal pictures and audio for your content. Some of the AI features enabled by the new chip include making picture adjustments based on scene detection, automatic volume levelling to help keep voices at similar levels, and the ability to add natural depth between foreground and background images.

Another addition to the flagship C and G series is new screen sizes to choose from. For smaller entertainment spaces, you can pick up a 42-inch C2 TV, while on the other end of the spectrum, the G2 series features a massive 97-inch model – the largest home 4K OLED display LG offers. At retailers this month, the C2 starts at $3,239, while the smallest 55-inch G2 starts at $4,799. Although if you want the 97-inch TV, you’ll have to wait for October and be prepared to spend $47,999.

Also coming this month for the first time in Australia is the LG ART90 Lifestyle model, a TV with a beige-coloured fabric curtain you can control via the LG Magic Remote. You can either raise or lower the curtain entirely, or leave it partially lowered for what LG refers to as selected lifestyle functions, including a digital clock display. Another exponent of the new LG OLED evo display technology and available this month in a 65-inch model, the LG ART90 Lifestyle TV has a $17,999 price tag.

Other notable additions to the LG TV lineup include a range of new 4K and 8K QNED Mini LED models ranging from 65-86 inches in size, which now also include various Precision Dimming technologies for precise backlight control and contrast.

All of the new LG TVs use the latest webOS 22 smart TV platform, which natively integrates many of Australia’s popular streaming services such as Disney+, Netflix, Kayo, and Optus Sport. Beyond film, TV shows, and sport, the LG TVs also include plenty of game optimisation features like NVIDIA G-Sync compatibility for smooth gameplay, in addition to native support for cloud gaming platform NVIDIA GeForce NOW.

It’s an impressive range of TVs from LG with something for most budgets, considering you can pick up a 4K UHD display for just over $1,000. Its C1 and G1 models were among the best worldwide, so we’ll be keen to see how much of an upgrade the latest LG TVs are.