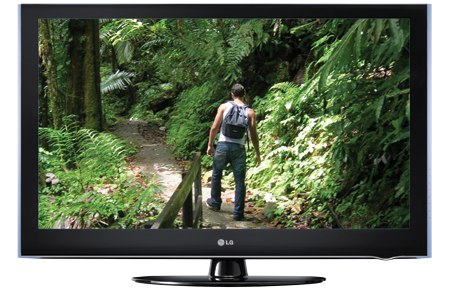 This review of the LG 42LH50YD LCD TV was as part of a collection of 5 reviews for the article Eco TVs – how green is your TV?. The 5 reviews have been gathered together in the article 5 eco TVs tried and tested.

At the time of writing, LG didn’t have a specific ‘eco’ model in its TV line-up, so we included a premium model from its new 200Hz TruMotion range: the 42LH50YD.

n leave it switched off. It basically controls the backlight level. ‘Low’ reduces power consumption by 3 percent, ‘Medium’ by 30 percent and ‘Maximum’ by 60 percent. This last was far too dark for enjoyable viewing. Another setting allows you to switch off the screen completely (reducing consumption by 80 percent), but the point of this is obscure to me. Why not just switch off the TV?

The final setting was ‘Auto’. When I selected it, it increased power consumption by 30 percent. This setting unleashes the TV’s light sensor, so in my fairly well-lit office it bumped up the back light level from about 70 percent (the default on the ‘Standard’ picture mode) to 100 percent. This is best avoided.

By default the TV’s ‘Dynamic Contrast’ in ‘Standard’ mode is set to ‘Medium’. Oddly, this had virtually no effect on the backlight level, even when the TV was displaying a full black screen. Putting it onto ‘High’ had the TV responding far better to dark scenes, reducing power consumption markedly in them. It made little difference as far as the regular test went (this is largely average in brightness), but improved picture quality and lowered consumption during dark scenes.

The 200 hertz processing provided by this TV has nothing to do with eco function, but it worked about as well as other such systems, with the same picture smoothness increases, the same failure to cope with really complicated Blu-ray images, the same artificial sheen placed over movies and the same processing artefacts. Still, the picture quality was very good (once tweaked with the Dynamic Contrast setting).