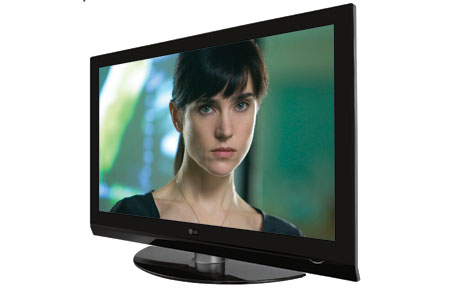 LG’s new low-cost range of plasma TVs feature traditional ‘high resolution’ panels – that is, 1024 x 768 pixels for the 106.7cm sized 42PG60UD – packed into an unusual ‘Frameless’ package. And all selling for an attractively low price.

By ‘Frameless’, LG doesn’t mean that the picture goes right up to the edges of the screen. In fact, the usual 50 to 60 mm of frame surrounds the display area. But the frame is part of a sheet of glass that covers the whole front of the TV, a millimetre or two in front of the plasma display surface itself. So the frame doesn’t stand forward from the picture screen, as is the norm, and the TV has a perfectly smooth fascia.

The TV comes on a swivel stand and has three HDMI inputs, one of them easily accessible from the side. Next to that HDMI input is also a USB socket, so you can plug in a USB memory stick to display your photos and play back music and DivX video. The photo display was by far the fastest to load that I’ve seen on a consumer device.

To be honest, initially I was not especially impressed with the whole ‘Frameless’ thing. It looked a little like a regular black-framed plasma TV, but with a sheet of glass placed in front to cover the whole thing, frame and all. But over time its virtue became apparent, especially the first evening when I switched out the room lights and ran my various tests for black levels.

Most TVs have some amount of reflection of the screen contents from the inside edge of the frame around the screen. This is particularly noticeable in dark scenes with a few bright elements. There, hanging at the edge of the screen, is a bright splash of colour or white, reflected on the (usually) piano gloss finish of the bezel.

But this TV has its ‘bezel’ painted on the inside of glass sheet. If you peer closely, you can see that rather than a somewhat reflective surface standing at right angles to the plasma surface, there is a small void between it and the ‘bezel’-bearing glass. There were no reflections. Small point, perhaps, but it quite eliminates an occasional distraction from the picture.

The colour performance of this TV was excellent. While LCD TVs continue to improve and narrow the gap, I still think the colour of plasma is just that bit more natural than LCD. For the most part, this TV’s colour looked like that from a high quality CRT TV, just bigger and far more detailed.

The black levels, when I switched off my room’s lights, seemed pretty ordinary indeed, and nothing like what a two million to one contrast ratio would seem to promise. So I explored the picture settings and found an ‘Energy Saving’ item which by default was set to ‘Intelligent Sensor’, which in turn was set to ‘Low’. Switching to anything other than ‘Intelligent Sensor’ improved the black levels enormously. They still weren’t the blackest I’ve seen in a plasma, but they were more than acceptable and dark scenes were rendered very acceptably.

The TV, despite having only 1024 x 768 pixels of resolution, accepted full 1080p signals, including the 24 hertz variety from Blu-ray, so it delivered smooth motion. Occasionally there was just a little instability on very fine picture detail, resulting from the scaling of full high definition signals down to this TV’s display, but it was generally very good.

For DVDs, it didn’t do a very good job of deinterlacing 576i signals, resulting in occasional jaggies and motion artefacts, so it would generally be best to use a high quality DVD player with progressive scan output.

The TV tuner did a good job, delivering a nice picture especially on the HD stations. The TV’s sound was, well, like regular TV sound. Nothing objectionable, but far better to get a real sound system to go with it.

I rather liked this TV. I found the frameless design to have actual picture-improving qualities. But the lack of full high definition resolution was, for me, a major drawback.