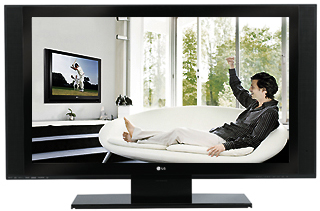 Glancing over the spec sheet of this 120 cm (near enough) LCD TV from LG makes you think that this must be the TV! It has a true high definition panel, with the full 1,920 by 1,080 pixels. It has dynamic contrast control to reduce the major weakness of LCD TVs: poor black levels. And it has a built-in 160GB hard disk drive so that you can record and time shift your TV programs.

Naturally, a true 1080 panel is the best way to watch high definition TV, and the new high definition discs: Blu-ray and HD DVD. This allows the picture to be shown as originally recorded, instead of being ‘scaled’ down to a lower resolution. With a TV as big of this, you’ll appreciate the full resolution.

The built-in high definition digital TV tuner allows the TV to take immediate advantage of its high definition display capabilities. But it also incorporates a pair of HDMI inputs (plus a couple of sets of HD-capable component video sockets) so you can plug both HD DVD and Blu-ray players in.

There is also an optical digital audio output, so if any of the HDTV programs are delivered with Dolby Digital 5.1 sound, you can plug this into a home theatre receiver for the full surround experience.

But it is the digital video recorder that really sets this TV apart. With its 160GB hard disk drive, it is good to record roughly 18 hours of HDTV, or 33 hours of SDTV. You can program the recorder for future and repeated recordings, or just hit the record key. It also supports a time shift feature, so that you can pause live TV and resume play at any time up to two hours later, or instantly rewind live TV. When you’re playing back your recordings, you can even edit them to delete the parts you don’t want, effectively extending the capacity of the unit.

As usual with LG TVs, the integration of the digital TV tuner into the unit is superb, with little differentiation between it and the analog tuner (aside, of course, from the much better picture quality). But the analog tuner is useful too, providing adequate picture quality and useful PIP convenience for monitoring another channel.

The DVR section worked like a dream: reliably and responsively. It isn’t as powerful as having a twin tuner PVR, but just the sheer fact that it is built-in and uses the TV remote control means that it is far more likely to be accepted into many families than the separate PVR. It is even capable of recording analog TV, and signals fed via the external analogue inputs (so long as they are standard definition).

All is not perfect, of course. The Teletext doesn’t work with the digital TV (the Text button is used only for subtitles), and the Guide key only conjures up Now and Next, not the full 24 hour electronic program guide available on some stations.

Finally, interlaced video fed into the analog inputs is treated routinely as though it is sourced from video, rather than film-source material being detected and allowed to deliver higher resolution. So, use a HDMI-equipped high quality DVD player. The TV accepts 1080p signals, including at the best 24 frames per second, but seems to convert it internally to 60 frames, just it remains a bit jerky.

Nevertheless, the sheer convenience of the DVR, the overall high quality of the picture (including colour performance) and decent black levels, make this TV well worth an audition at your local retailer.