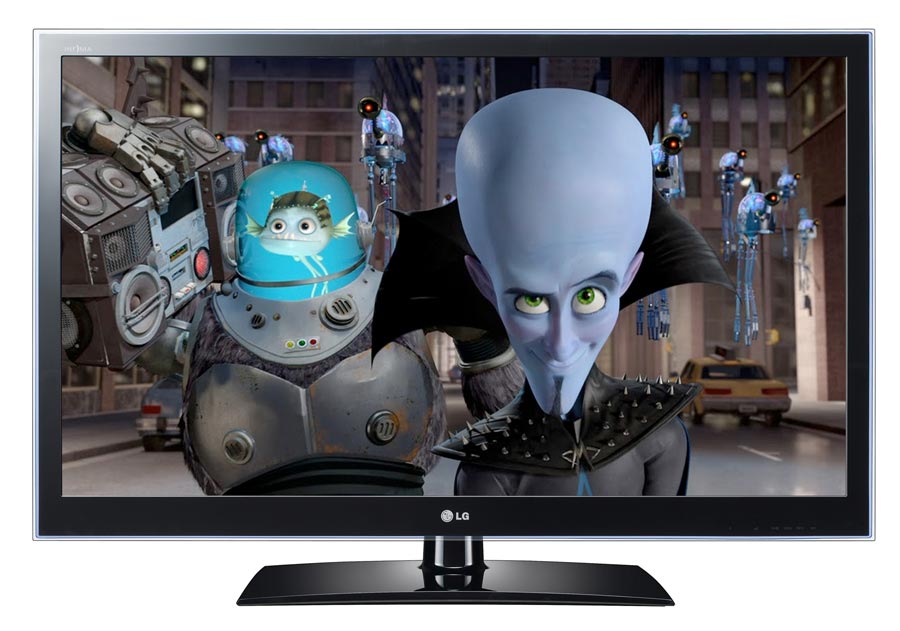 3D TV is still new. So new that the basic technology for delivering it is still in a state of flux. Most brands have gone for the ‘shutter glasses’ technique, in which the left and right eye perspectives on the picture are flashed on the screen in sequence, and the glasses only let each eye see the particular perspective intended for it.

First, let’s look at this briefly as a regular TV. It has a thin (just under 30mm) LED backlit pane. I say backlit rather than edge lit, because somehow LG has managed to stuff the lights behind the panel, despite its thinness. Furthermore, there are 16 individually controllable LED ‘blocks’, so the TV can selectively brighten some portions of the screen while darkening others.

It comes with all the stuff you’d expect from a 2011 model premium TV. It of course has a HD digital tuner built in (and analog), supports a PVR function if you plug a USB disk drive into one of its USB sockets, and has extensive networking capabilities. Indeed, it supports YouTube and BigPond Movies and TV and both the ABC and Channel 7 replay channels. There are also a number of internet-based Widgets, including Facebook.

The 3D system uses ‘passive’ glasses of the kind used in cinemas. This makes them much less expensive, to the point that you get four sets in the box and can buy more in packs of two for $19. The LG glasses are, unaccountably, white framed.

Passive glasses work by means of polarised light. Light waves have a characteristic twist – either clockwise or anticlockwise. Filters can be applied so that only one or the other can get through. That’s what’s in these glasses. The TV screen has each horizontal row of pixels polarised either one way or the other. If you’re not wearing these glasses it makes no difference. But if you are, then each eye only sees every second row of pixels. The 3D processing makes sure that the picture for the left and right eyes goes to the matching rows of pixels.

As a 2D TV this was a pretty good unit. Black levels were good and there was none of the cloudy grey patches near the edges of dark screens that you see with some edge-lit LED TVs. Furthermore, by having the backlights tuned to work only on the parts of the screen demanded by the picture, there was an apparent stretching of the visible contrast. It looks pretty good.

The networking stuff all worked very nicely. It connected easily to my existing BigPond Movies account, and when I selected an item to watch it was streaming within seconds. The quality was good and there were no pauses for rebuffering.

But what about the 3D picture? Well, it was very, very good, so long as you are prepared to make some trade-offs. Its strength was in almost complete elimination of any crosstalk or ghosting, which is when some of one eye’s perspective makes it through to the other eye. It was also completely free of any sense of flicker, either in the TV picture itself or from room lights. In that way it was very relaxing.

The 3D effect was unaffected by head tilting, and remained operative on a very wide angle of view from left to right.

Against that, though, the vertical angle of view was quite limited. If your head is a few tens of centimetres above the screen the polarising filters simply fail to work and you see in both eyes the whole image. You really do need to have your line of sight perpendicular to the centre of the screen.

And the other defect is that in 3D mode the TV only delivers half the resolution. You get 540 horizontal lines for each eye instead of 1080. Mostly this wasn’t much of a problem, but some high-contrast diagonals showed quite visible jaggies where there shouldn’t have been any.

LG tossed in its optional Magic Motion Remote for us to have a look at. This costs $79 and is in two parts: a cutdown remote (with just a few basic controls) and a wireless receiver box which plugs into the TV’s USB port. Press ‘OK’ on the remote and a set of cross hairs appears on the TV screen, along with some popup menus. By pointing the remote you drag the crosshairs around to the various menus, and then you can do pretty much anything.

It takes a bit of getting used to, but within 15 minutes I was using it to enter my email address into the BigPond Movies sign-up screen far more efficiently than I would have managed with arrow keys.

It isn’t a killer advance in TV remote control technology, but it isn’t half bad either.

So, as a 2D TV, the LG 47LW6500 is a good performer (it has full resolution for this) with excellent networked extras available. As a 3D TV, the trade-off in resolution is probably worth it, with the onscreen image presented as something more like DVD rather than Blu-ray quality.