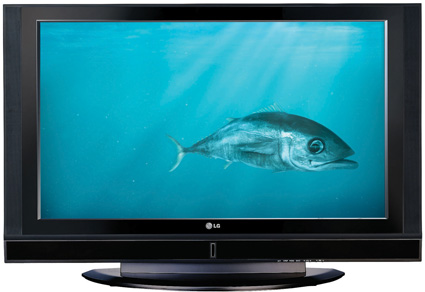 I have to admit to gasping when I heard about LG’s 50PC1D. Imagine this: a high quality, high resolution 50 inch (127 cm) plasma TV, with built-in high definition digital TV tuner, all for a recommended retail price of just $4,500. That means you ought to be able to do a deal and get close to just $4,000. Wow!

The LG 50PC10 comes with a good, if basic, set of necessary features. The desktop stand is pre-attached. The panel has the usual resolution for this size: 1366 x 768 pixels. LG’s XD processing is included, which adjusts the picture for optimal viewing.

And there is a 14-bit processor for video, which LG says is good for a modest 4.3 trillion colours. This is something that a few companies go on about, but in fact you can’t make something out of nothing, and you certainly can’t make several trillion colours out of the tens of thousands actually in the DVD or broadcast TV source signal.

Finally, it is physically very well built, weighing some 52 kilograms.

There is one thing that LG does better than any other TV manufacturer: it integrates its digital TV functionality seamlessly into the unit. When you fire up the TV for the first time it conducts a scan of the airwaves looking for TV stations. And it gathers them all, both analog and digital, all at once. After five minutes or so the thing is done and you can go and make changes if you wish, such as ‘skipping’ the stations you don’t want, and selecting favourite stations.

You shouldn’t really expect much in the way of performance from a $4,500 fifty inch plasma TV, but in this case you’d be wrong. Fed with a high-quality source (such as the in-built digital TV tuner, or a DVD player connected via HDMI), it produced a very good picture. The picture quality with high definition broadcasts was particularly good, especially when comparing the SD and HD versions of the same program.

The scaling of the input signal to the panel’s resolution was very good, with support up to 1080i signals. There was no support, though, for 1080p (progressive scan), so with Blu-ray and HD DVD you will have to make do with the lesser 1080i output. The TV did a particularly good job with DVDs, when the signal was delivering in progressive scan format via HDMI, producing smooth and clean results.

The black levels were strong, although at the very darkest levels they tended to crush together a little (the darkest shades disappearing into full black) so that some very low level detail was lost.

Video delivered in interlaced format into the analog component inputs wasn’t handled well, though, with the TV insisting on treating it as interlaced, even if the original picture was sourced from film. This reduced resolution and introduced artefacts. Even switching to the ‘Cinema’ mode in the Advanced picture menu failed to correct this. So stick with a digital HDMI connector.

If you want to improve on this TV, buy the seventh generation Pioneer plasma. But that’ll cost you $2,300 more. For the dollars asked for the LG 50PC10, it is simply brilliant.