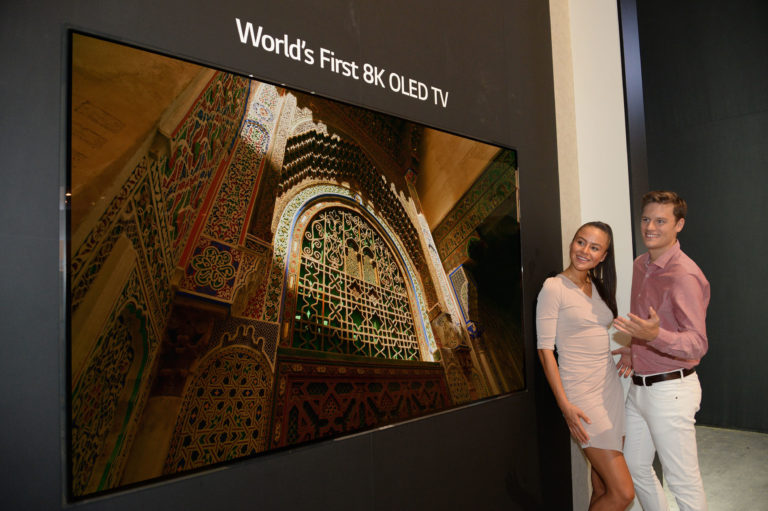 LG wowed delegates to the IFA (Internationale FunkAusstellung – German for International Radio Exhibition) to show off what it claims is the world’s first 88″ 8K OLED TV.

Damn my 4K OLED is barely a year old and I thought that was pretty good!

“LG Electronics began the mass production of OLED TVs in 2013. OLED is  the best TVs on the back of its capabilities to deliver a complete black with outstanding contrast ratio,” the company said. It claims the 8K TV with a 33-megapixel resolution will help LG solidify its foothold in the OLED TV industry.

We don’t have much more information apart from the photo’s sent to us by Angus Jones, General Manager of Marketing for LG Australia. They were taken an LG V30+ ThinQ – good shots!

There is little commercially available content yet as 8K streaming requires around 100Mbps per channel/stream. Not even NBN on the highest tier and on a good day can stream 8K.

8K is being used to shoot some raw footage – football, Olympics etc. It is so easy to digitally zoom and cut for 4K or 1K broadcast. Adoption of 8K is some years away. Just as 4K has taken three to four years to become mainstream.

Because of the number of pixels screen sizes are likely to start at 65” and go well above that. The higher pixel count means stunning clarity at similar viewing distances to 4K.

The critical thing with 8K will be its ability to upscale from readily available 1K and 4K content. That is going to require massive CPU/GPU horsepower.