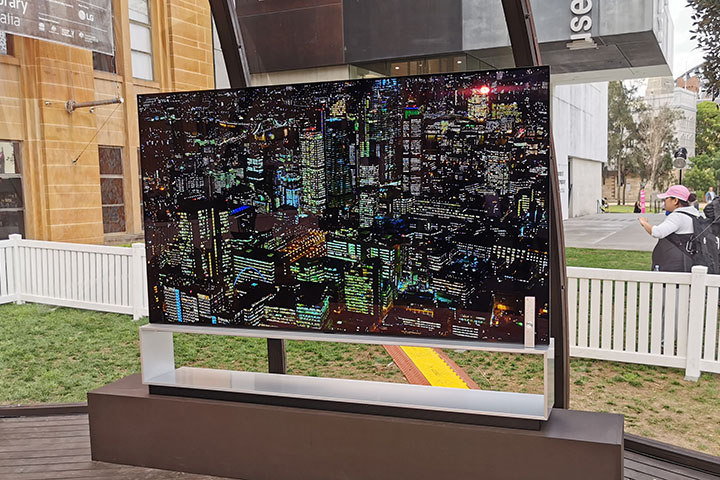 I think it’s possible to make the case that the LG 8K OLED TV, the first of its kind to appear, could be crowned the best TV presently available. I have absolutely no reason to dispute that, and I doubt I ever will since the chances of conducting an intimate review of this new arrival are close to nil. Why not, as I so often do, ask LG to ship the TV to Canberra so I can review it? Well, at $60K per unit, and a screen size of 88 inches, I think I’m safe in assuming its reluctance. Heck, I think I agree with its reluctance.

So, instead, I’m basing my initial impressions derived from the launch event at the Museum of Contemporary Art at Circular Quay in Sydney, yesterday evening. LG had a glass dome erected out the front of the building to house this TV (which, to remind you, costs more that the entry level version of the Volvo S60 I was recently admiring).

And I’m also basing it on my experience with LG OLED, which includes my own purchase of a 65-inch model a couple of years ago.

So, LG OLED? Not just first class, but the best. There was some discussion around the ultimate brightness levels of OLED TV, particularly vis-à-vis LED/LCD. I don’t think you can dispute that at least some models of the latter go brighter than OLED. But the reality is that the response of the human eye to light is logarithmic. Even if you double the measured brightness, the end result only looks a bit brighter.

I have generally been of the view that the really impressive part of OLED performance – its perfect blacks and the richness that this lends to colour – was manifested only in a darkened room. LG put paid to that view because inside the MCA it had its new 77-inch C9 model OLED ($13,499) next to its new 75-inch 8K NanoCell TV ($11, 849) and was feeding both the same signal. Even though there was regular room lighting on, the OLED was clearly richer and more vibrant than the NanoCell model. Score 1 for OLED.

It also thoroughly exceeds the Information Display Measurement Standards required for a “real 8K” display. These require half of all the pixels to be able to be distinguished from their immediate neighbours. Apparently, for some 8K TVs the rate is only around 15%. LG’s 8K models score 90% or better.

The LG 8K OLED TV comes with an integrated floor stand that features subwoofer and Dolby Atmos speakers. Yes, in the photos that’s clear space between the two horizontal sections.

Read more about this new – probably best yet – TV here. Just so we know what we’re talking about, its formal model identifier is LG OLED88Z9PTA, popularly known as the Z9.