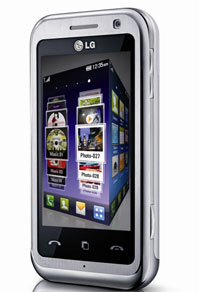 LG has really stepped up over the past 12 months in the fight for smartphone supremacy. And they tend not to be about the business-style BlackBerry clones, but all about the bling – the sexy Prada touchscreen, the happy-snapper Viewty, and now the latest fashion-phone, the Arena. It’s clear from the second you fire it up that LG is chasing the Apple iPhone market with the Arena’s svelte design and icon-tapping menus – but is there any substance behind the style?

As far as features are concerned, the LG Arena is an impressive piece of work. The first thing you’ll probably notice is LG’s innovative menu system, dubbed the ‘S-Class’ user interface. It’s basically four different menu screens which you can rotate through with a sideward swipe of the thumb; flicking between shortcuts, widgets, contacts and multimedia. It’s simple enough to use, but probably would have been easier to just have all options on one single homescreen instead of four. The shortcuts screen is destined to be the main ‘home screen’, giving single-tap access to your favourite apps, while the widgets screen offers some cool mini-apps like weather, notes, world times etc.

The phone feels really well designed. The touchscreen is big, bright, and gives a satisfying buzz when you tap on an icon, the body is slim and iPod inspired, and the camera is a cut above most mobiles. 5.0 megapixel photos are really print-quality, it feels like you’re using a simple but easy-to-use digital camera. Add DivX video and even Dolby Mobile sound, and you can utilise some impressive video potential to an already impressive still camera.

Then you’ve got a web-browser, which offers a mixed experience. It’s far better than most mobiles, but nowhere near the experience you’ll get on an iPhone or BlackBerry. Full web pages load easily enough (and quickly if you’re on a WiFi network) but navigation is cumbersome – zooming is sluggish, scrolling just as bad. Not a device you’ll be spending a lot of time online with.

For multimedia, the Arena is feature-packed and comes with a hefty 8GB of internal memory, a simple MP3 player (and great internal speaker), decent screen for watching video on (and with video-out capabilities if you prefer to hook it up to your TV), an FM radio, picture galleries – it’s pretty much got it all.

The Arena’s price tag puts it in the realm of handsets like the Apple iPhone (which it greatly imitates), the more business-y BlackBerry Bold, Nokia’s N95 8GB or other LG phones like the Viewty. And it fares OK – just OK. The iPhone is a far better bet if you need a good web browser, Arena’s is a real let down. For emails you’d go for the BlackBerry – this is not a phone for the business user. But as far as multimedia goes, the Arena stands tall next to high-end Nokia’s, other LG’s, and even the iPhone so go is its video, camera, and music player capabilities.

Looking for a fashionable touchscreen mobile phone that will turn heads? This should be in the top 5 on your list. The firmware needs to be tweaked to get menus running a little smoother and the web browser needs work, but the rest of the Arena’s features are pretty impressive. Google Maps with A-GPS, brilliant camera, slimline design, innovative widgets – a nimble touchscreen handset with a list of applications to match most rivals.

The LG Arena will be available from Vodafone stores across the country for $0 upfront on either the $69 or $79 per month Internet Cap (on a 24 month contract) or can be purchased outright for RRP: $799. Optus and Telstra to follow.