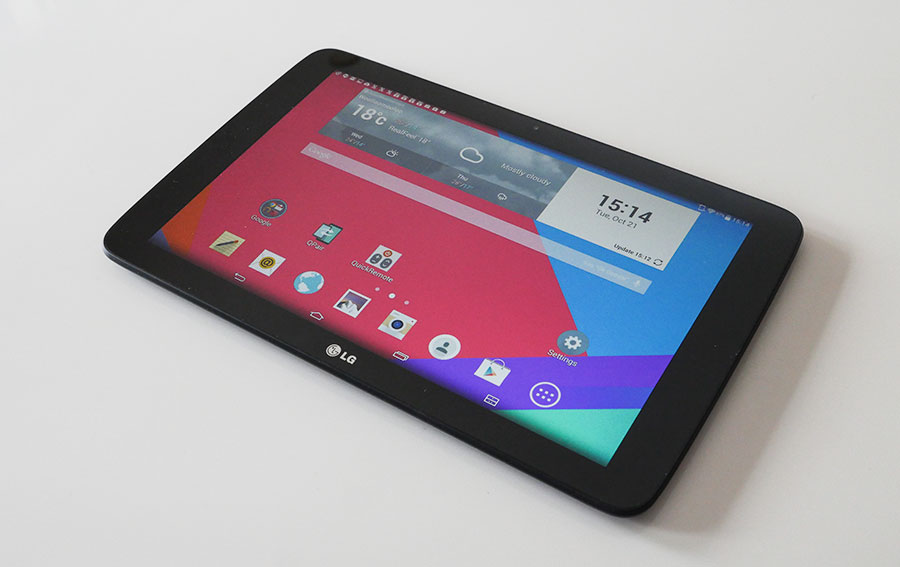 LG’s G3 really grabbed our attention earlier in the year, so we’re expecting good things from a tablet launched around the same time, but is the G Pad 10.1 worth your time, or would you be better suited looking for something else?

A new entry in LG’s “G Pad” line, the G Pad 10.1 or the V700 as LG people call it is a new 10 inch tablet from a company with a rather mixed history in tablets. We’ve seen models from LG sprinkled between Android and Windows throughout the years, and the V700 sits in the Android camp, continuing what the G Pad 8.3 set out last year, but bringing it to a bigger 10.1 inch display (up form 8.3 inches).

In the model, however, is a different set of innards as well as a different screen, with that 10.1 inch display showing off 1280×800 resolution and providing a pixel clarity of just under 150 pixels per inch, well below the 264 pixels per inch the iPad Air 2 relies on.

Under that screen is a Qualcomm Snapdragon 400 quad-core processor clocked at 1.2GHz, working with the Adreno 305 graphics chip, 1GB RAM, and 16GB storage, with a microSD slot provided to make more storage available.

Connection options are fairly standard with a few extra bits and bobs, providing 802.11a/b/g/n WiFi, DLNA, Bluetooth 4.0, Near-Field Communication, and GPS, as well as an infrared port, the latter of which is normally a premium feature for LG’s phones and tablets.

The wired connection of microUSB is also here, ideal for changing and data transfer, as well as a 3.5mm jack for listening to music or plugging the G Pad 10.1 into a speaker.

Ports are limited, as are buttons, with merely the 3.5mm headset jack and microUSB ports, though there is a microSD slot found on the left side with these other two ports. As for those buttons, it’s just volume rocker and power button along the top edge, with the rest of LG’s buttons on-screen as per the way Google’s Android normally works.

It’s the time of the season for tablets, and everyone has them.

LG has had a tablet a few times by now — some of them have even had 3D, others have run on Windows 8 — but in the G Pad 10.1, we’re looking at a minimalist take on Android with the look and feel of the G3 applied to a 10 inch tablet.

Pick up the tablet, and the G Pad isn’t the slick not-quite-metal device that the G3 smartphone was, nor is it the slick glass appliance that the original Optimus G tried to be. Rather, it’s closer to feeling indistinguishable from half of the tablets out there in stores.

It’s not necessarily a me-too product, but it’s not far off, since the design is basically just a coloured back — in the case of our review model, black, but there is a red option — with a screen on the front.

On the one hand, you could say it’s minimalist, but on the other it’s mediocre and unexciting, with the look and feel of something inexpensive, rather than the sort of quality LG normally prides itself with in the products we’re used to seeing.

LG doesn’t necessarily do inexpensive, however, and so some of the specs here suggest that this is not a budget tablet, while others do.

For instance, there’s an infrared port, something only LG flagship phones receive, meaning you can use the tablet as a remote if you need to, and Bluetooth and NFC are also here, but the specs are actually lower than last year’s G Pad, dropping from the Snapdragon 600 to a 400, and receiving less speed (1.2 versus 1.7) with a gigabyte less RAM.

The screen has received a drop in specs as well, going from a Full HD 1920×1200 on a smaller display to a high-definition only 1280×800 resolution on a bigger display, making the pixel per inch count worse on the new model.

And yet — and yet — there’s Near-Field Communication on this model, as well as infrared, features normally reserved for flagship devices.

At least using the tablet reveals decent performance with a hint of lag, though it won’t be the sort most people won’t have a problem with.

Battery life is also not bad, or fantastic depending on how often you use the tablet.

If you say use your tablet all the time, expect to charge it every day or two.

If you’re like us, however, and rely on it more for a content consumption device, the charging can happen every few days, as the 8000mAh battery here retains its charge quite well, which is something other tablets don’t often do so well in.

The screen is also a pleasure to look at from most angles, because even though the display runs a lowly 1280×800 and the text isn’t amazingly clear due to that screen size, it still has excellent viewing angles and is quite bright.

And most people will be happy with it, because really there’s nothing stupendously horrible with the G Pad, but it just so happens that there’s also nothing totally remarkable about it, either.

The fact is, the design is just so basic, with no amount of detail applied to the back, and yet a strange slick feeling coating used, making the G Pad 10.1 feel at once slippery and greasy.

While the metallic rear surface of the iPad tablets exude quality and the dotted plastic back of the Tab S gives off a sensation of fabric, LG feels more like it’s going for a soft rubber wheel from a children’s toy, and it doesn’t make you think you’re holding something of worth, and that’s if you can hold onto it for all that long to begin with.

The screen could also be a lot better.

We’ve said it before and we’ll say it again: unless a tablet is aimed squarely at the budget section of the market, there is no good reason anymore for it to have a high-definition only screen, not when Full HD and higher has become the norm for many a tablet.

It’s not as if 1920×1080 and higher is hard to come by, and we’ve seen it in 10 inch tablets for a number of years now. We even saw Generally, the lower resolutions are meant for budgets, and usually those below the $200 mark.

Worse, it’s a lower resolution than LG’s G Pad from last year, the 8.3, which brought with it a Full HD display and transplanted it to an 8.3 inch display size, a model which also sported the same price.

There’s nothing wrong with LG’s 10.1 inch G Pad, other than the fact that it really has nothing strong going for it.

This isn’t designed in the same image of the light and super-thin Ultra PC we saw earlier in the year, and it’s not cut from the same mould that produced the excellent benchmark setting G3 smartphone either.

Rather, it’s a generic tablet that feels less impressive than the G Pad the company launched last year.

That’s not a bad thing, either, but it’s also not a good thing, and given that there are so many different tablets out there vying for your attention, we’d seriously look around and see if anything else catches your eyes before you plonk a good three- or four-hundred bucks on LG’s entrant to this category.

Overall
Features
Value for money
Performance
Ease of Use
Design
Reader Rating0 Votes
Bright screen with good viewing angles; Excellent battery; Can be upgraded with more storage over microSD;
Back feels overly rubberised and greasy; Screen is a mediocre 1280x800 screen in a world where Full HD has more or less become the standard; Nothing particularly standout about the tablet;
3.5