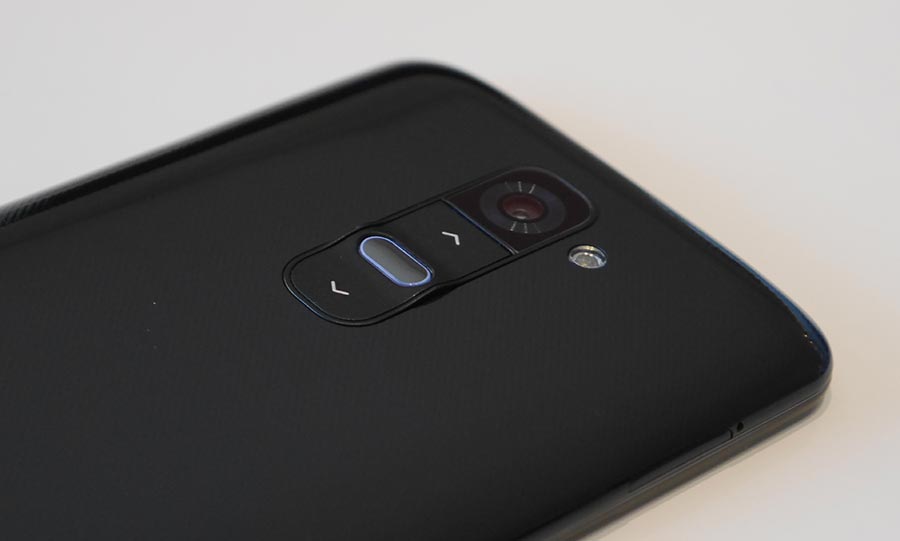 K2 is one of the world’s tallest peaks. G2 is a new high point in smartphones, providing a mountain of functionality and NBN-busting speeds. LG is offering much to admire and enjoy here.

The second flagship smartphone of the year for LG, the G2 is a different beast from its brother the Optimus G, which was released early in 2013.

Gone is the “Optimus” moniker that LG has been bandying about for the past few years, with the phone just called the “G” now, and the number ‘2’ indicating that it is the second version.

Version 2 is more than just a slight enhancement, however, with a new body, new chip, new screen, and new practically everything else.

First the specs, and LG has moved on from the older quad-core chip in the Optimus G to a much newer 2.26GHz quad-core Snapdragon 800 processor which is paired with 2GB RAM, an Adreno 330 graphics chip and 16GB of storage. Just like the previous Optimus, there’s no expandable storage beyond the 16GB provided.

The screen is also bigger, pushed from 4.7 inches to a roomy 5.2, and now sporting a Full HD panel over the standard HD version used in the previous generation.

Connectivity is pretty high-end, though, and LG has made sure to include Bluetooth 4.0 with A2DP (for music streaming), Near-Field Communication, infrared, 802.11 a/b/g/n/ac wireless networking and 4G support across TD-LTE, as well as Cat 4 LTE (though we didn’t test either of these features in this review, thanks to Telstra currently lacking support for either).

The design of the handset is all plastic, a change from the glass body of the previous generation but, just like in the last version, the back cannot be removed, and everything is contained. This includes the battery, which is rated for 3000mAh.

Few buttons exist on the smartphone’s sleek case, and in this device, LG has elected to use Google’s on-screen soft buttons instead of its own, so these are built into the version of Android, and can change position based on how you want to use the phone.

The only physical buttons on the G2 are on the back, with a volume up, power button, and volume down located just below the camera.

Ports are equally sparse, and include a 3.5mm stereo headset jack and microUSB charge and data transfer port on the bottom, flanked on each side by speakers.

It seems like only yesterday that LG first let Australians play with the Optimus G. Released back in March, the device sported some decent innards in a solid glass design, but didn’t quite match the specs of some of the phones that were due to be released later this year.

Now, several months on, we’re seeing a new product that is truly ready to take on the competition.

We’ll start with the look and feel of this handset because it’s a completely different design from what we saw in the Optimus G.

Gone is the emphasis on glass that made us fall in love with the simplicity of the Optimus G’s design, replaced with a similar plastic body to what Samsung uses in its Galaxy handsets, though without one of those replaceable backs.

It’s a slick look, one decked out mostly in black, though LG has kept that holographic pattern we saw in the G around for this second incarnation, as it helps it stand apart from other ‘black as black’ smartphones.

In the hands, the plastic body is comfortable, though also a touch slippery, partly due to the all plastic back and glass front. It’s also very easy to see your fingerprints on the back, and is one of the downsides of going with a shiny plastic material on the rear. We’d still have preferred metal like in the HTC One or glass in the G2’s predecessor, but the plastic likely gives LG more room to move for shaping it better.

That said, it’s still very comfy to hold, and LG’s use of curves around the back lends itself well to the shape of the hand, making the device fit naturally in the crevices as you grip.

The G2 is also the first time we’re seeing LG truly move beyond design trends, skipping the regular use of the top and sides for button placement.

Rather than stick these in their regular places, LG has put them on the back, moving the volume rocker to just under the 13 megapixel camera, with the power button in between the volume up and volume down.

This idea is an interesting one, and we get what LG is trying to say: in essence, many of us hold a bigger phone with our fingers in this position on the back and the thumb on the front, so why not have the buttons back here?

It certainly makes for a slicker phone, especially with no bits hanging off the sides or edges.

Ultimately, it’s a neat idea, but it’s also one that takes some getting used to.

There were times when we liked gripping these buttons because it made sense, and others — usually while we were walking — where we wished the volume rocker was still on the side so we didn’t have to pull the phone out just to change the volume of the handset in our pants pockets.